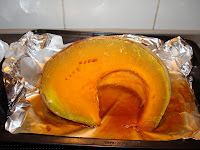 This week's Tuesday with Dorie was chosen by Vibi from La Casserole Caree. She has the recipe here. (I tried to use the Google translator, but it failed for me. I will try again, but she has very kindly run a translation for her Anglophone readers.)

For me, this was a very difficult recipe. To start with, Germany doesn't have canned pumpkin nor does it have what we in the US would consider "ordinary" pumpkin: sugar pumpkin. So I baked the above pumpkin to prepare the equivalent of a can of pumpkin puree (a can would be 15 oz, I wound up using the entire amount at 16 oz.)

Europe also does not have (either to my knowledge or to easy acquisition): corn syrup, brown sugar, pecans, shortening, vanilla extract, or pie pans. 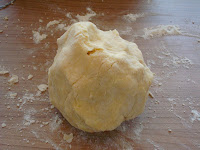 Luckily, I brought the brown 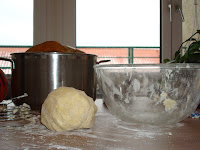 sugar, pie pans and vanilla extract with me (and will make the latter when I run out). So I made the pie crust with all butter (the recipe calls for a bit of shortening as well). I have always previously made my dough with Crisco and I now know that I don't like pie crust made with fat. I do now understand why I have always preferred my mother's pie crust to any that I have eaten out: there is a taste to a butter crust, and a texture, that I now recognize and I prefer Crisco to that. 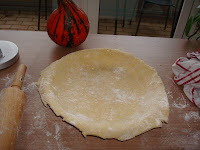 On the other hand, considering 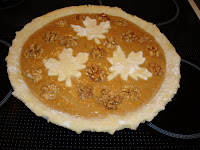 that I used a pastry cutter (I don't have a food processor here), the actual dough preparation and roll ou went very well. Because butter here has such a high fat content that it remains soft even in the refrigerator, I froze a 250 g bar. I then weighed out 10 oz, cut it into a small dice, and cut the ingredients together. After looking at everyone else's comments, I decided not to pre-bake the shell (and I changed the temperature to 220C for 15 minutes with a foil cover, then 45 minutes at 185C).I had given up on the "pecan brittle"-style mixture that should be poured on top of the pumpkin pie mixture but in the spirit of the Twofer, I studded the top with walnuts. I also used some of the extra dough (and there was almost enough for a whole extra crust) to add some leaf cut-outs to the top. 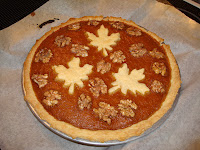 Here is the pie cooked: it looked great 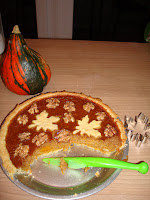 and my daughter was mad to eat it. It baked up well, but I didn't love it: a mixture of not caring very much for the taste and texture of the crust and not loving the taste of this German pumpkin. I don't think I will make it again, although my husband will probably finish it off. I also think I need to run along to the KaDeWe and find me some Crisco. My daughter was sadly disappointed in the taste as well. I think she will be far more appreciative of the next TwD, the Linzer Sables.

(Edit: We liked this pie much more the day after, chilled in the refrigerator. Still couldn't pique Thing1's interest, but the Ger,an and I finished it over the next several days. So, all's well that ends well.)
Posted by G in Berlin at 11/25/2008 10:07:00 PM

Thank you very much G, for participating with me this week! I'm sorry the pie didn't turn out to be as you had hoped and especially after all those efforts of finding replacement ingredients!
Nevertheless, I do have to admit it is a darn good looking pie!

It looked beautiful - even if it didn't taste as you wished.

That's such a pretty pie! It looks perfect to me. I use Hokkaido pumpkins for pie and they taste really nice, then again, I can't remember anymore how a pie made with canned pumpkin tastes so I'm sure there is a difference. Palmin soft is a pretty good substitute for Crisco or other shorting - I've used it with butter for pie crust and it was OK.

That looks really, really tasty!! :) I'm really impressed that you made your pastry - i'm a total pastry wimp and always buy mine.

I'm with everyone else - it looks SOOOO pretty!!!

It is a beautiful pie. Sorry you din't like it. Lots of stuff you get used to in the U.S. are hard to find in the "Old Country". Glad you made the pastry too.

The things you don't realize you need in Germany. In the old days it was peanut butter! Happy Thanksgiving.