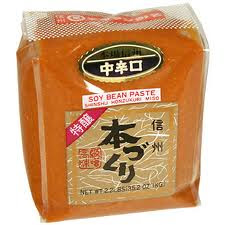 When I made the Carrot-Ginger- Indian Spice soup, I said that I would circle back after trying a Carrot-Ginger-Miso soup that I had seen. And so I have.
I started with this recipe from Smitten Kitchen and changed it up a bit by looking at this from Chef's Blade, which was taken from the Candle Café Cookbook. And some of it (like the celery and lack of sesame) is because I just like it that way
(I actually think that celery, carrots, onions and garlic are the holy quartet, and should always be sauteed in olive oil together).
Carrot Ginger Miso Soup
olive oil
lots of Carrots (I used about 1.5 kg/3= lbs, cut in coins)
2 onions (diced)
6-8 stalks celery, diced.
3-4 cloves of garlic, sliced
lots of sliced, peeled ginger root (I used two thumbs worth)
red miso, 1/2 cup (or less to taste)
4-6 cups water
scallions to garnish
I heated the oil in a small stock pot, then sauteed the onions for 5 minutes, after which I added the garlic and sauteed. Then I added the carrots and celery and sauteed for another 10 minutes, stirring occassionally until softening up a bit. I added the ginger and salt and pepper (starting with 1 T salt/pepper) while sauteeing. Then I added the water (started with 4 cups) and covered the pot and let it simmer for 30 minutes, checking to see that the water was sufficient. If the carrots feel done at this point, pull out the stab-mixer and start pureeing. I needed to add 1 cup water while doing this. Then grab the miso (I started with 1/4 cup), mix it up with a fork in a bowl with a cup of hot water (I used the waterboiler) and add it to the soup and mix in. While tasting, I wound up adding 1/4 cup more (to make a total of 1/2 cup). Let it simmer a bit more, add salt and pepper to taste (it's probably salty enough from the miso) and serve with chopped scallions if you like.
Takes about 30 minutes total. You can use vegetable stock in addition to the water if desired (I was out). The spouse ate it all- he liked it more than I and I was eating the vegetarian chili while he was making his very happy way through this over the next several days. He votes this his favorite soup so far.
Posted by G in Berlin at 2/10/2012 08:37:00 AM No comments:

People who know me would rate me as a low-maintenance sort of person. 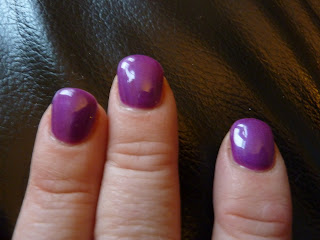 I own a lipstick (and use it occasionally), but my other make-up has all gone so far out of date as to be unusable (in fact, I discarded the majority of it a few declutters ago). I still have perfume from the 80's (truly, I still have perfume that my grandmother left me, but I only smell it every now and then).

I have been complimented on my earrings, to receive a look of shock when I happily point out the little Mickey Mouses (hypo-allergenic from Disneyworld) and often grab my daughters' medical plastic earrings. I have had my hair cut three times in the 4.5 years we have lived in Germany and had not had a manicure in the last five (my feeling- why bother when my hands are always washing something and the nails crack from 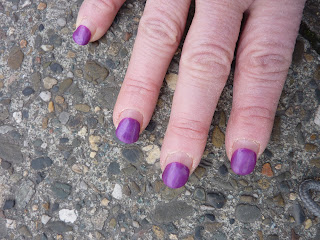 use?). However, after I had a manicure in Florida, using the new, UV-cured nail polish, I liked having a manicure that didn't crack in the first day so much, that I found a place here in Berlin that did the same thing (although with a far smaller selection of colors. This was the most interesting that I could find and this manicure lasted 40 days: with it, I achieved the longest nails I have ever had. And I think that I will continue to do it: when amortized over 4 weeks, it's actually quite reasonable. And I have been enjoying having normal length nails.
Posted by G in Berlin at 2/08/2012 07:06:00 PM 1 comment: