Another interesting month. But one thing that I want to do around all the craziness and planning and activity is to start reading through some of my physical books, to get them off the shelves (or, actually, out of the piles on flat surfaces like window sills and radiators!) and get them packed away. So I am trying to read the physical rather than be seduced into the new and e-. Interim goal is at least 10 physical books read this month and packed into a box— I'm running behind by the middle of the month.

Didn't get all the books I wanted in, but it's been a busy month: I hope to get some started and not finished May posts up this week.

The Doctor is taking Patients now 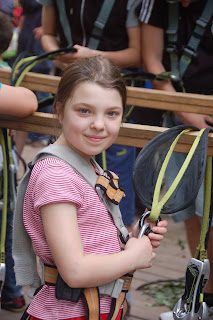 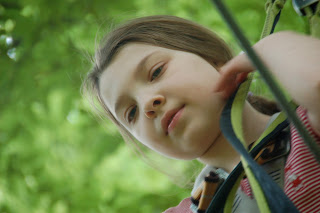 While T2 had a birthday party to go to, T1 had the opportunity to do her absolute favorite thing: go to a Kletterwald (climbing park).

This is hard to do when we have both children, because T2 is too small (a minimum"reach" is required) and a bit frightened, but nevertheless really wants to go as well. 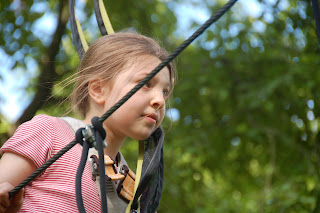 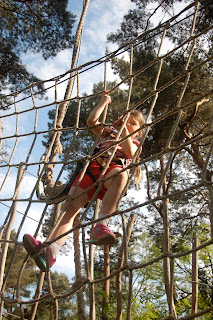 The look of seriousness and concentration is exciting to watch and her joy as she succeeds is infectious.

She is my courageous and athletic girl (definitely gets the coordination from her father). 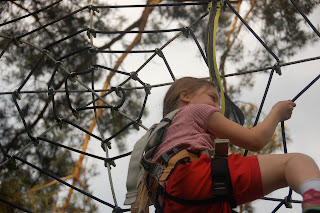 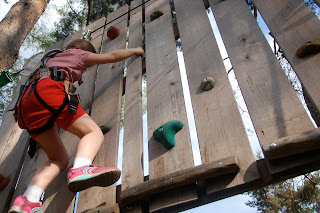 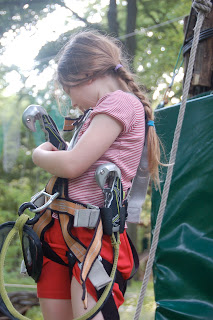 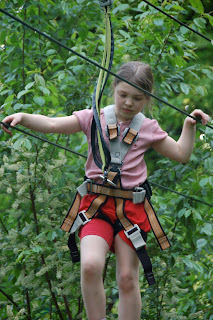 Dancing with a Bear

And a birthday in two parts

T2 had her birthday celebration broken by the holidays, T1's birthday, and some other excursions, but we finally got it all done! 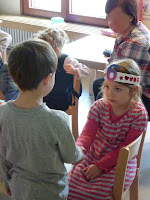 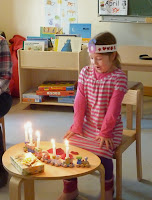 First, she had her birthday in class. For once, I didn't stay to take photos and these are from her Erzieherin. I like the "Birthday train" so much that last year I bought one myself. It only goes up to 9 (do you think there is an extension set?), so I guess that it is aimed at the Grundschule set. Afterwards, they play traditional German birthday games (which have the birthday child wearing a crown and acting as master of ceremonies: is this how the bossiness is inculcate?) and each other child personally congratulates the Geburtstagkind with a handshake and the ritual "Herzlichen Gluckwunsch". I brought in the standard cake, but I also brought in goody-bags, as we invited only the girls to the later, outside, party. 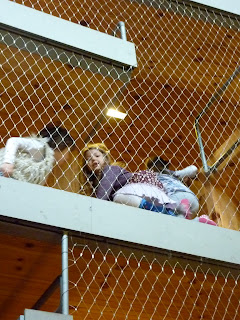 The second part of the party, held several weeks later, was at the Kindermuseum MACHmit! I had heard good things about the museum, and because of the weather and the number of children (even with just girls, it was larger than any party we have had) we decided we needed a program. The girls really enjoyed the climbing area and the chocolate cake (for once not one I made myself), but the program was a little bit above their level— more for the 8 year old and her friend then a group of 5-6 year olds. I'm disappointed that one of the guides was not able to understand that giving a note to a non-reading child is a bit inutile. The other guide was great with kids, though.

We will visit the museum again, when we can be more free-form. 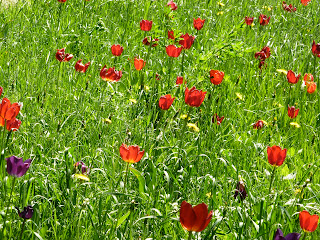 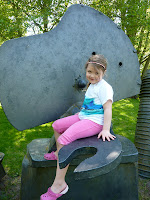 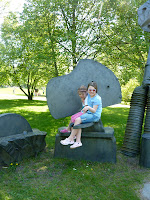 The first of May is a holiday in Germany, both because it is Labor Day (that is, the day of the Workers, or International Worker's Day) and because the Walpurgis Nacht is from April 30th through May 1st, and the witches congregate not far from here, in the Harz Mountains.


Berlin, a former member of the Communist Eastern Bloc, celebrates it a bit more strongly than other areas, with a local tradition of riots. Recently, the riots have attracted folks from all over Germany and the rioters have been found to be such people as doctors and middle managers, looking for the chance to put on a mask and destroy property. The Berlin Police have strengthened their defense and the areas in question are not local to me, so, on this absolutely gorgeous day, we packed up the kids and went to Britzer Garten, smack in the middle of its Tulip Festival. 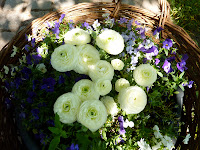 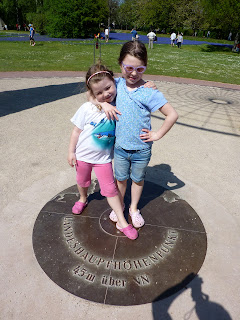 I had been unhappy to miss our annual visit to the Keukenhof (when we headed that way in early April, the weather was so bad- it rained every day. all day) that we cancelled continuing further in the Netherlands and grabbed the moments of sunshine to take short walks and visit relatives. So it was a great pleasure to have the opportunity to walk through a large garden on a beautiful day. Although, what a difference! The Britzer Garten is really just another green space in Berlin (although with a very small entrance fee) and, rather than a manicured and pristine spot, it is a huge, well-used, well-loved and public friendly green space. With food kiosks (all with reasonable prices for both food and - it's Germany- alcohol). 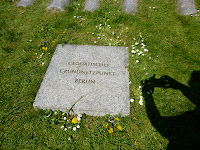 We wandered about, we climbed the viewing stations (like lifeguard lookouts) and gazed over the expanses, we swam in the sea of flowers (as allowed, through paths and walkable lawns), we sat by the side of a lake and a river, rolled down a huge hill, used several different playgrounds, looked at the water and sand play area (but did not use it- when the Germans let their small children play naked in water, I won't let mine: I see them using it as an open toilet and that is just not defensible).