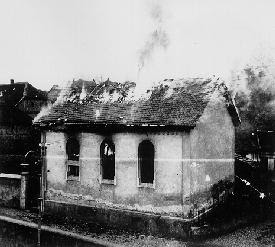 BERLIN (AP) — "We must not be silent" about condemning anti-Semitism, German chancellor Angela Merkel declared Sunday as Germany and Israel commemorated the 70th anniversary of Kristallnacht, the Nazi-incited riots against Jews.
With concerts, prayers and ceremonies, participants vowed to honor Kristallnacht victims with renewed vigilance. The riots are seen by many as the first step leading to the Nazis' systematic murder of 6 million Jews in the Holocaust.

Germany's history, and Berlin's place in it, is something that I never forget. As I walk the pleasant streets I pass the silent markers showing where Jews once lived and were then taken to die, where we once owned property and it was taken from us, where we once worshipped and were buried, before our synagogues were destroyed and our graveyards desecrated.

As I listen to Germans talk about America's faults (and now of their happiness at our "great change" with the election of Senator Obama), I always remember that the country where we were once more assimilated than any country ever (other than modern day America) was Weimar Germany and that they went from being us, our friends, lovers, spouses and countrymen, to being our betrayers and murderers in only a few short years.

As I look at the Polizei guarding every Jewish space (in pairs) and the walls surrounding every kindergarten and official space: I don't forget. I will never forget. And what makes me most sad is that the walls and guards are needed.

Thank you for a very moving post. It is important never to forget. In my little town, there are those markers on the pavement and every time I see one, I stop and remember them.

Thanks for being aware, Charlotte. Sometimes I feel that I am moving in a world that was washed with horror, where only I notice that the streets were once washed with blood.Of course, that's not true. Others notice. But sometimes I feel as if it is.