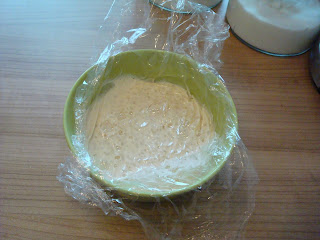 (Here shown with the plastic wrap to prevent skin formation- although I like skin and will leave it off next time.) 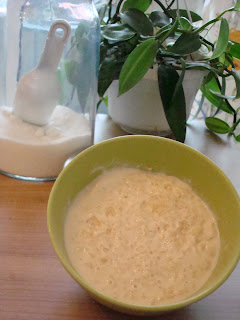 Well, whew. I got it made today and it is sitting in the refrigerator for the required 6 hours chill. I would like to thank Isa of Les 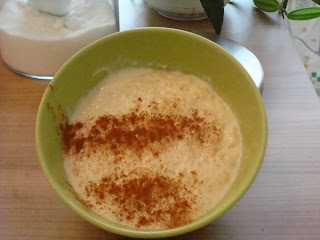 Gourmandis d'Isa for choosing a non-threatening recipe for this week, and one for which I actually had all the ingredients sitting in my pantry.

I had hoped to have it up by noon New York time, but I went out and looked at the questions and answers after I put it in the refrigerator to cool (and next time I will look before I make it) only to discover that there was both a problem with the cooking time (needs to be doubled from that in the book) and the ratio of rice to milk (most agreed it should be increased).

So I pulled the two bowls out of the refrigerator, put them back into the saucepan, added a bit more rice and started to cook it again. Since there is a mult-hour cooling time for this, I don't expect I will have the picture up until later, but I will post this now and add them. 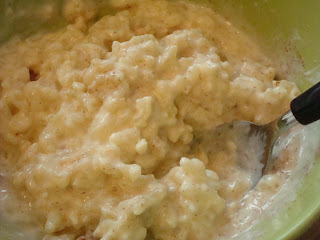 From the taste of the rice pudding (soup) I tried, it will be delicious, and if it is actually as simple as it seems (once the cooking time and rice amount hae been adjusted), then I expect I will start making it regularly.

---Here are the pictures- I added a bit of cinnamon and it made a positive difference. I like the pudding very much but I found it a bit more bland than the usual run and next time I make it (and I will) I will try adding raisins or another dried fruit and perhaps even a bit of salt for contrast (ever since I made the NYT Chocolate chip cookie mix, I am in love with salt in sweets).
Posted by G in Berlin at 11/18/2008 01:41:00 PM

I cant to see what yours looked like. I am glad you were able to save it after reading what people were saying on the site.
I chose to skip this week which I am glad i did because mine would have been soup as well!

I think it looks great, and I love the addition of the cinnamon!