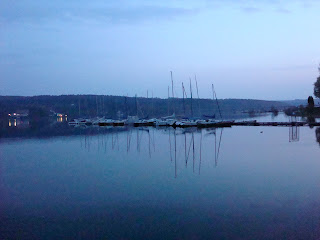 This is the gloaming at the lake where my sister-in-law's Boat Club is and where she was having her birthday party. Her boyfriend, brother-in-law and uncle all have sailboats here. We got back from the Keukenhof lateish, met C, our former au pair and friend who very kindly agreed to babysit for us, and walked down to the lake.

It was a very nice party, the German was inveigled into playing his trumpet (I think only the second time I have ever seen him play) and it was fun to see him, his sister, and C (G's boyfriend) all playing together (with the rest of G's group).

My cousin was a Foreign Exchange student in Germany during H.S. We loved hearing his stories about German parties and beer. I think that is what he learned the most about from his year abroad :)

And boy oh boy, don't those 'sauerkrauts' know how to party! LOL We thought the Aussie knew a trick or two, but they whip us everytime.

Have you been to a Polterabend yet?

Mrs. Incredible: Thanks for stopping by:-)

What a great site! Or the short for m would be: sweet talked.
Aren't the lilacs gorgeous? I think those are double French.I miss my yard;-(

I was at my sister-in-laws Polterabend. I thought that was amazing, but at the wedding, once again, we all went home at sunrise. In fact, we walked the wedding couple out at sunrise and some people kept partying!