What's on my shelf...and what's on yours? 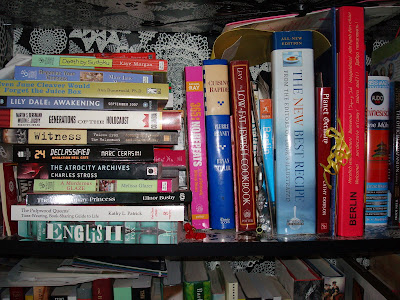 Slouching Mom posted a new meme (originally from Niobe) showing what is on her shelves.

SM felt that was harder than exposing her morning face. Well, I'm not going to expose my face because the German wants to remain anonymous, but SM- I don't wear any make-up either. (In fact, we might be related, looking at our snub noses and uncontrollable hair. Do you have cowlicks too?)

Moving on, here's one shelf. I might add another later, but I am a bit atypical: since we have such limited storage space here, I tend to remove the books I have finished and don't want to refer to later, which is why this shelf is a bit heavy on cookbooks. The Lilydale is awaiting the sequel before it's put away. And the Chinese self-study (unopened, I must add, is the German's). The books are pretty typical of my interests though, and you can look at what I have been reading this year in the Goodreads icon on the left of my blog.

I'm going to tag people for this meme (my first time!), but feel free to pass if you don't want to or don't have the time:

Diana at Martinis for Two
Lynda at Lulu's Bay
Snooker at Snooker in Berlin
Cathy at Planet Germany (your book is on my shelf;-))
Dani at Earth to Dani (looking forward to your book being out)
Dr J at Alien Ted

and Ree at Pioneer Woman, who I expect has too many comments to have time for this (but whose blog is fabulous and you should all check it out).

And anyone else who care to join in: please drop me a line if you post and maybe I can try a mosaic like Lynda did with her window meme and set up a list of links for those who participate.
Posted by G in Berlin at 4/03/2008 09:32:00 AM

Interesting books! Thanks for sharing.

Thanks for the tag...I'll do this when I get back to India...sometime after the 15th.

Thanks for the tag... I have posted mine now!

I'm just relieved the theme was the bookshelves, not my underwear drawer or behind the sofa...

Hi G - thanks for the suggestion to join in. I have posted a section of my bookshelf - and it features one of my cats!

Count me in! I'll try to get to it this week!