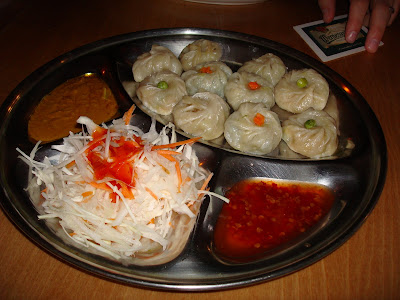 I love this place. I love it so much that we pay a babysitter more an hour than the cost of one of the extremely reasonably priced entrees. What you see above is a mixed plate of Momo balls. These things are great. the sauce is a slightly sweet chili sauce and the three colors topping the steamed dumplings indicate the fillings: in this case, vegetable, lamb, and spinach mit kase (I think frischkase). The salad is a type of kohlsalat, very light and refreshing (and crunchy). I like these so much that the last two times we have gone to the restaurant I had them as a main dish rather than an appetizer. I started with a Tom Yam Gai (a chicken base soup). I asked for it to be a little spicey (and I'm a person who eats habanero stuffed olives) and it was wicked spicey, so much so that the German could not share it with me, so be cautious if asking for extra spice. Although I'm never certain whether when one asks for extra spice, whether the staff take it personally and really ramp the spiciness up. 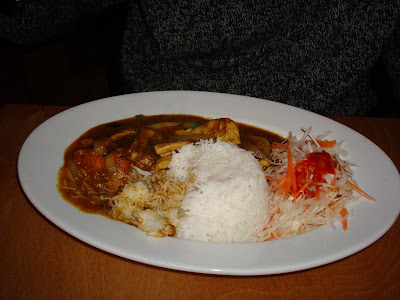 I wasn't able to get a picture of this charo tareko, a chicken dish, before the German had dug his chopsticks in. It was very tasty, although he still felt hungry afterward and ordered himself a dal-lindensuppe which he also enjoyed.

We like this place so much that last night the German called an order in and diverted his way home from work to pick up a take out order: we had some guests and I had enthused about my Momo balls, so I wanted them to try them.

What I learned from the experience was: 1. Don't order soup unless you bring your own containers. I should have remembered from our last take-out experience (an Indian restaurant) that Berlin restaurants don't have appropriate containers and that the soup always leaks. 2. Although they gave us lots of extra chili sauce, as I had requested, it was straight chili sauce, rather than the sweet/hot variety that I usually get with the momo balls. (They also come with peanut sauce, but I don't like that so requested to have none). Fortunately, I also like straight chili sauce (not oil-based, yeah!) but I really like the other as well and will request that in the future.

And I missed the Cobra bier I drank at the restaurant. I'm not a big beer drinker at all (would usually prefer cider, apfel schorle or even water) there's just something about a pale ale/Indian style beer (I guess that's a really hoppy beer?) that I think goes really well with spicy foods.

That looks yum... we took the plunge and ordered some Thai takeout last week.. very sad indeed it was.

Have to check out those momo balls sometime soon... you can bring me some when you come to cairo.

Send me an email (address is on the blog) and I will ferret out as much info as possible about your trip. Check out TUIfly to start. They offer flights from Berlin to cairo (not sociable hours) but super cheap. Don't evven think about August!

When I come to Berlin I will be checking out this restaurant. Thai is my FAVORITE!!!

Your going to Egypt? Let me know if you have any questions for Max. I'll pass them along.

If you like Thai food, you should check out some of my recommendations (hopefully they're not too outdated): http://www.amiexpat.com/2006/09/24/thai-food-in-berlin/

I've also got quite a few recipes posted: http://www.amiexpat.com/recipes/

Lynda- since I am putting this off to January, I've got some time. I'll e-mail some general questions. I do love those momo balls (and the sweet and hot sauce).

Diane- when are you coming to Berlin? I'll book a babysitter a month in advance! Perhaps you should try to come for the Cirque de Soleil show in June? Or Linkin Park... Is Max Egyptian? I missed that... I guess the big question is- what would he say that we should do in order to feel happy about seeing Egypt?

Christina- I need to find that storeyou are citing, by Wittenbergplatz. I'm feeling a little burned right now because I walked 40 minutes each way to find a Jewish food store only to find that it was closed (with the sign still up) and no one able to help (and it was raining, as usual!). I check your recipes out all the time and have to start getting myself into shopping lists when I market, or I never have the right food!