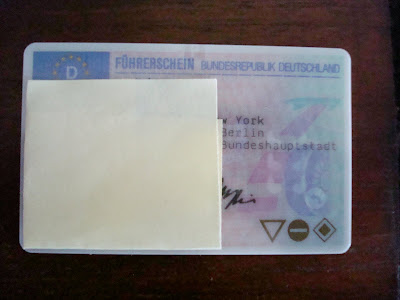 So, only 4 months after we set the wheels in motion (ie, jumping through all the required hoops) my new Fuehrerschein is here.

It started with having an American driver's license from a state that has reciprocity with Germany. Then having that translated and 'notarized' and taking that to the ADAC with my passport (and all the other official documents that they said they would not need but did). Then we (the German and I, because they were only in German) filled out forms, paid our fees, and went off, expecting to be notified of the license arrival in 11 weeks. We were told it could not be mailed, which was itself problematic, of course, because we were expecting to leave Berlin before it would arrive. I would then, apparently, need to fly back to Berlin to pick it up.That was mid-November.

We received the letter stating that the license was in March 19th. What with all of our illnesses and the holidays, I went to the correct Landsamt, off Friedrichstrasse, to pick it up Monday. It's 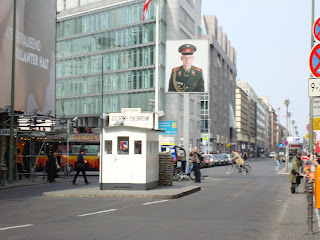 located just down the street from Checkpoint Charlie (so now I know the U-Bahn stop for that museum).

After going in the wrong entrance and being sent around, providing my letter, my passport, and my driver's license in one waiting room, I was sent to another. In that room a gentleman asked who I was, handed me my Fuehrerschein and bade me a cheery fare-well, while retaining my US license.

In my oh so pitiful German, I tried to explain to him that I actually needed to keep my US license. After my second sentence, he sent me along to another room. In that room, a woman explained to me, in extremely rapid German, that Germany would allow me to have only 1 license and that I should use my German license when visiting the US.

She offered me the option of paying 100Euros every time I needed my USA license and that they could keep it somewhere that would require my asking for it a week or two in advance, which I said was both exorbitant (zu tueur fur mich) and unbelievable (unglaublich). I asked her what she suggested I do, in a city where the average apartment costs 300Euro a month, and she just shrugged. So I said thank you and left.

I assume that the answer is to get another US license when I am in the States and I assume that is what her shrug was suggesting that I do and I think that's just great: to need to break the law in order to be legal.

Another typical German experience where the letter of the law absolutely is more important than the meaning behind it. Sometime soon I will blog about our experience with German banks and with German American Express.

G - congratulations on the license. I'm still in the process of getting mine....I have to take the theory and practical test which is a major pain in the bottom.

I hope you can get a replacement in the US.

PS - thanks for the cat tip!

Helen- I had actually read that going through that process costs more than 2000Euro, so I made certain I wouldn't need to do it before I left;-).
If you have time, check out the bookshelf meme below...perhaps after the visit is over!

Like you my last license was from one of the lucky states which had a direct transferral to the German license... yippiee!

Also like you I was quite interested in keeping my U.S. license. But of course you know how that turned out.

My German had that nasty conversation with the official and got out of it that Germany would be notifying the state of origin that the license had been transferred.

The very next time I was in the states we got very close to just going into the license bureau and having it reissued, but decided against it.

BUT, I completely understand about the motorcycle restriction and your fears about that.

BTW, your post said something about US citizens are specifically not allowed to drive on a German license. I have never heard about that. In fact, after learning that I would lose my U.S. license, I thought that we had found that I would be OK in the U.S. with the German one.

Snooker: Acto what I have read, one may drive witha foreign license if on's passport has a specific visa in it. The German is at work and I don't remember the number, but he has it (and a US license as well as a German one, of course.) But that visa is one that only non-citizens can have, so there is no way for a US citizen to have it. Whether any policeman would know that is, of course, a different question. As is, why doesn't the damn thing have an address on it? It's useless to me as an ID.

Hi, new reader here. I found your blog off your comment on Snooker's. A bit late, but welcome to Germany.

Ah, I need to do this sometime soon. Not looking forward to it. Especially if it means more stubborn officials who think law is more important than common sense. Oh my.

Same experience, but I knew in advance that they were going to hang on the US license (and as you can't renew what they are hanging on to) I just did what I needed to do.

It took them 12 weeks to retrieve my files from a city 70km away when I changed my name. And they didn't know how to deal with there not being an issue date on my US DL (thank God I still had the paper prelim license which had a date on it).

I doubt very much that they are in touch with your home state.