The Holiday Whirl: Will it never end? December 22-31 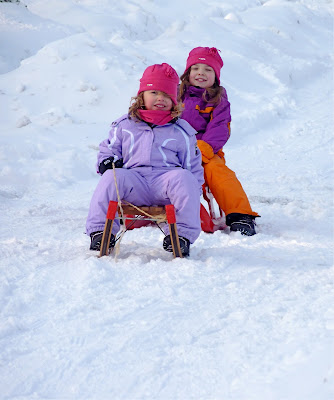 Sledding at Oma and Opa's House
After getting back from the UK (and counting our blessings that the weather did not interfere with our plans in any substantive way) we came back to a full schedule.

We got back Tuesday afternoon and sent the in-laws on their way with effusive thanks: we offered entertainment but they wanted to get back to prepare for the holidays (and every day my mother-in-law is not there is a day that someone needs to substitute for her on the organ and at the retirement home).

TMI following, feel free to skip: Then I got to fast. Wednesday morning was my (delayed) colonoscopy. After we extended he contract here in Germany, I realized that I needed to start actually considering my health, getting a three years too late annual exam, a full gyn, a mammogram (and ouch, they were extremely good at checking the margins!), a lung X-ray when my internist got tired of hearing me cough, and finally the colonoscopy. This is when I am grateful to be on extremely good Expat insurance (legal because we are here on secondment, otherwise not allowed to German residents). I think that with family history one can get checked for these things earlier than the German standard, but I'm not certain. What I do know is that my sister-in-law hasn't asked and she has an even stronger (worse) family history than I do: at her age I had been checked for 5 years. All was well with all the tests, the German prep for the colonoscopy was even worse than the American one, and I can wait four years until the next: Yeah.

Then more traveling:
Next came the last days of school and the drive to NRW. That's where we really ran into the weather issues that we had avoided traveling to the UK: 9 1/2 hours to travel a distance that usually takes us less than 4 1/2. The A2 was closed in the morning but then it reopened and we thought we could get through. Until it started raining heavily while -.5C and the Autobahn became a sheet of ice while all salt and grit washed away. We were actually very fortunate that the traffic came to a dead halt while we could see an exit and we wound up getting off, taking the kids to the (unbelievably packed) McDonalds we saw in the distance and checking the computer and with the in-laws to discover that there was a 26 km stau– we spoke to people who had stood on the highway unmoving for more than 10 hours. In our case, after consultation with our neighbors at the table to the right (they had a million maps!) and father-in-law, we wound up going south and detouring through Kassel before heading back north. It was much easier as we went south and it became colder with the precipitation being snow rather than rain. I was cursing that we hadn't chosen to take the train after hearing the forecasts, but we found out the next day that four ICE trains had been stuck on the tracks between Berlin and Hamburg due to cold and ice, so we were definitely better off in the car. We got there a bit before 2 am and carried the kids to bed.
Then we had a leisurely and domestic holiday. Some highlights:

This is an actual German Christmas tree. Those 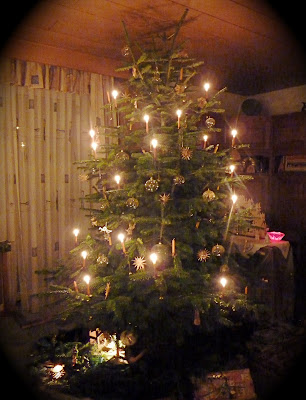 lights that you see are not cleverly designed electric lights, they are actual candles burning on an actual pine tree that is not sitting in a container of water (because they don't water trees here) in a room lined and roofed with wood and next to curtains.Amazing, isn't it? (Also, note no fire extinguisher or bucket of water in room). Keeps one on one's 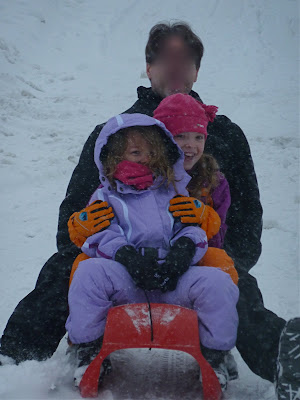 
This is my charmingly anonymous spouse and the girls. Note how warm they appear. The one without ski pants or waterproof gloves is the one taking the picture. The hill is the actual street outside my in-law's: the day after we arrived it became usable only if one entered above and exited below, Those who tried it the other way made loud revving noises until the German and the F-I-L dug them out. They seemed to enjoy it and we spent some time every day sledding here and on other hills in the area. We weren't as venturesome as my sister-in-law, whose husband dragged the kids on sleds up a steep hill in a neighboring town, then rode back down with them.

We met up for lunch with our former au pair in the US (I can't believe that she's about to start her internship in medical school) and had a nice chat: I wish we lived closer by and I hope she has the time to visit us after exams. All around a pleasant and domestic time, which included all members of 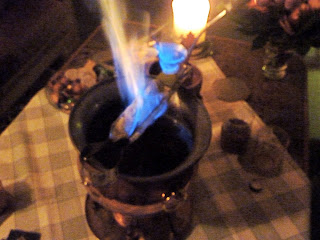 the family playing instruments and singing carols as well as enjoying (adults only) the traditional Feuerzangenbowle. I actually like this, which is surprising because I generally hate Glühwein– perhaps because what I am served at Weihnachtsmarkts is more usually Glögg?