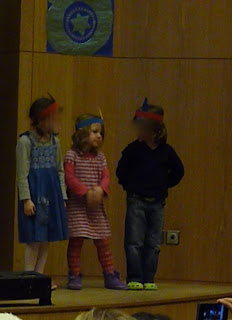 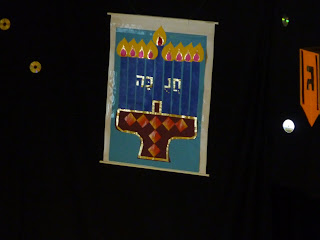 When the German and I went to T2's Chanukah party, we expected to hang out in their room, sing a few songs, light a Chanukiah, and eat (I brought a chocolate cake).
Instead, they had a wonder show in the big auditorium: T2 (who is amazingly shy in public, although not in private) even participated a bit. We were very proud and surprised, and then went back to the room and ate and chatted. We had a nice chat with a new mom from Israel via Seattle and her in-laws who were in visiting.
T2's Erziehrin asked for the recipe of this and the chocolate chip cookies that T2 brought on Friday (when she was Shabbat mamma), which made me very pleased. I explained that it was probably the dark brown sugar which made them so lecker, which might be an issue, but said that I would bring the recipes in next week in any case.
Posted by G in Berlin at 12/06/2010 08:42:00 PM