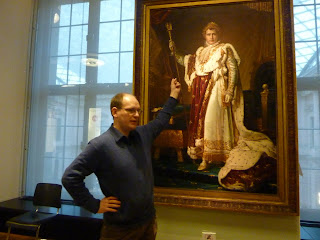 It was a hectic day today as I had an Orienteeringskurs Ausflug (field trip) today, to the Deutsches Historisches Museum, while at the same time the German had a minor operation and then later in the evening we had tickets to a musical: that's what happens when one tries to get everything done in December and mandatory items pile up. After making the kids breakfast, I said good-bye (we had a babysitter booked for 11, giving the German 40 minutes to get to the doctor).
My class met up at the U-Bahn station at 9:30, walked over to the museum (we were 15 minutes too early) and then were able to leave our coats and bags in a group lock up, which was nice. We had 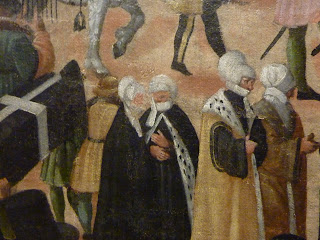 a guided tour through a bit of the early history into the current period (I am again impressed at the wonderful quality of all museum guides that I have been in contact with in Germany- they are amazingly good at their jobs). The detail you see at the left (it's a tiny detail) shows what in English would be called a "scold's bridle", showing how inhumanely women in the west were once treated.
We were then were given workbooks and sent forth to do research on the N*DP (N*zis and the period from 1933-1948).
It's good to know that individuals who are seeking to either become permanent residents of Germany or to become citizens will be required to have at least a cursory understanding of the role of Germany in WWII: this course is generally a stop on the way to both (although I have my permanent residency already and am simply taking the course to expand my knowledge of Germany). I don't think it's enough (the government is discussing increasing the course to 60 hours), but I still have more than 30 hours left of the 45 hour curriculum, so I will be interested to see what the remaining portion teaches us.
The museum is beautifully laid out and I expect that we will return to it as a family to take a tour of the medieval portion (they have one for children concentrating on knights and castles). The section on the Holocaust is well-done and tastefully done, although, really, I don't enjoy this and if I had known what the concentration would be I probably would have excused myself— I don't feel that I need further education on the subject.
The most interesting interaction of the experience was when we stopped in front of a painting from the late 30's. It showed a triumphal Arc in Munich (based on the Arc d'Triumph, apparently). On the left were N*zi youth collecting money from passers by. In the center, walking in the direction of the Arch was a tall, erect man, on crutches and missing his right leg from the knee down. He is striding and wearing a military overcoat. His head is proudly held high. On the right, by the arch, is a woman in widow's weeds, pushing a white pram.
The guide asked the group whether we felt that this painting was in favor of the war or against it. I immediately replied, in favor. Every other person replied, against. The guide asked me whether I wanted to change my reply and I said no: I thought it was clear that every person in that picture was proud of themselves and their country.
When he asked the other students, they said how sad the picture was. I pointed out that they probably would not have felt the picture was sad if N*zi Germany had won the war.
Then the guide explained that I was correct- that the picture had been used as propaganda in the "Total War" drive and the direction ran, from left to right, of how one should give to the Fatherland: least is money, next would be limbs and the final and highest sacrifice, one's life (or one's husband's, since this was aimed at the domestic market).
I find it a little bit frightening that a group of 15 people could read something so obviously incorrectly.
Posted by G in Berlin at 12/11/2010 10:27:00 PM

Checked out that bridle...OUCH! Women have come a longer way than I realized!

Oh and kudos to you for being the only one right in your assessment.