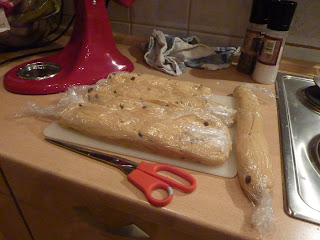 Chanukah began on the 1st and we lit the candles and celebrated, but with the German working until today, this was the beginning of what will be a month over filled with activities.

T1 was shabbat mamma, so I put together a double recipe of chocolate chip cookies so that I could bake a batch for her and have a batch to bake for T2's holiday party next Tuesday. The double batch was almost more than my Artisan 5 quart could handle!

Then the German took T1 to her regular ceramics course but went an hour earlier so that she could add an hour of drawing to the 2 hours she does ceramics in: she loved it and we will try to split it at 90 minutes each in the future.

Then they rushed back because we booked our favorite babysitter (aghh- she's retiring from babysitting at the end of the month to open her own kita!) and went to the holiday party put on by my women's club. 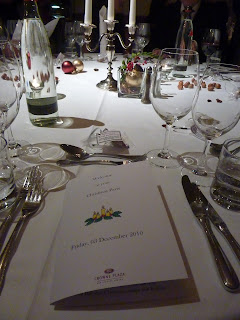 It was formal dress, at a nice hotel, and with entertainment. The only thing missing was dancing (there was some, but it was entertainment put on by the hosting group). Lots of fun.

I enjoyed chatting with folks and bumped into a woman who recognized me from Thanksgiving, although we hadn't met before: it's a small world here in Berlin.
Posted by G in Berlin at 12/03/2010 08:54:00 PM

You sound positively settled now. Do you even recognize yourself when you look back from the beginning of Berlin? But it's a good thing, not bad.