The Holiday whirl: Off to the UK, War of the Worlds 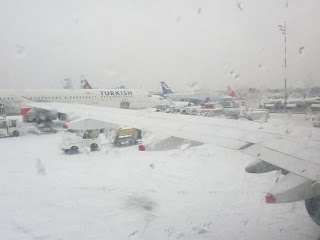 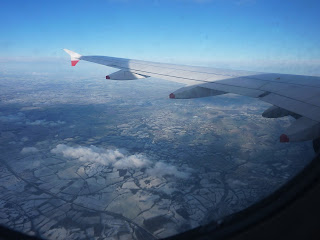 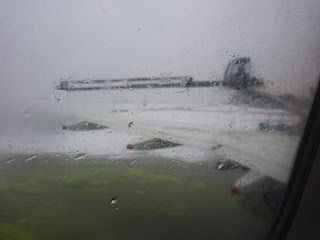 After last year, I had planned on never attempting to visit the UK or travel within Europe by plane during the months of December or January.

(Wow- looking back I can see that I never blogged about being abandoned in London, having RyanAir leave me sleeping on the floor without even a blanket, having ValueJet cancel a booked flight even before the booking, while I made my way to Luton to find only contracted workers telling everyone nothing, while in mud to our ankles, and finally getting out on BerlinAir, to the wrong city and then traveling to Düsseldorf and onward by DBahn! Suffice it to say that it was plenty horrible. Including the cancellation of trains from Brighton and being left standing outside for 3 hours while waiting for laid on buses to a functional train to get me to London in the first place— all due to perhaps 5 inches of snow! RyanAir still hasn't repaid my flight, let alone the two days in hotel or multiple rides to the airport while they messed with me.)

Unfortunately, we had been looking forward to seeing Jeff Wayne's 3oth Anniversary War of the Worlds tour right here in Berlin at the O2, when we received an e-mail, telling us that the show had been rescheduled for 2012. When I went to the tours site to discover why, I found out that the German promoter had decided to pull the tour and have it redone in German, which was why it would take an extra year until it was ready.
I was not enthusiastic. The character of the narrator, Richard Burton's voice, is integral. And I love the original and don't really have the desire to hear it translated/dubbed into German. The production company offered those of us the option of buying tickets for any of the remaining venues in the tour and the day that made the most sense (if I were to go with the German) was the last: Saturday December 18th at Wembley Arena. The date gave me a certain amount of stress, considering what had happened last year. Before booking, we got agreement from the (unbelievably great) in-laws that they could come and take care of the children for an extended weekend, as school would be in session, and we were able to add another concert on Monday the 20th— tickets to Shakira at the O2 in London were available for hotel points and we thought— "Why Not?".
So we booked a flight out Friday morning the 19th, assuming that would give us some time to deal with weather emergencies and I was grateful: England had two inches of snow and the beginning of what would be a serious weather emergency did impact us. On our side, Berlin had snow, T2 was ill, and the in-laws came in a bit earlier than they had expected to make certain they would be in place. We were two hours late taking off, but no biggie, and it was interesting to see the de-icing operation.
When we got into London, we had some coffee, grabbed our bags, and bought Oyster cards, which are the only way to economically get around on the London transit system. We planned this trip to be economical and were in no hurray, so we took the regular Tube into Central London rather than the Heathrow Express.
We stayed the first two nights at Leicester Square Holiday Inn through points, so it was free, but the location was not perfect. Although close to Leicester Square, it was a bit of a drag getting our luggage through the snow, ice and slush to the quiet hotel several streets back. In addition, although we were under the roof in a decent looking room with an adequate view, it was cold!

I spent the rest of the day being ill (as the German was the following day) and we think it was a manifestation of what T2 had, although thankfully without the projectile vomiting. We kept the heat cranked up and used extra blankets but it was cold and snowing and the windows in the bathroom were, we think the source of the cold due to inadequate insulation.

We wandered the area in the snow after a nap and stepped into a wonderful Thai place, the best I've eaten in since Munich, and the spices definitely helped my headache:). It was a lot of fun window shopping in the center of the London shopping district and looking at the lights, although we actually didn't wind up buying anything in the city at all. London always feels much more like home to me than Berlin does: it's not just the language, but the design and energy are so much closer to NY than Berlin.

On Saturday we wandered a bit more through a deserted London— there were outages throughout the public transportation system although examining them, it was clear that the real issues were on the lines that had above ground areas due to signal failures. The damage to the shopping season must have been great because entire streets were empty of walkers in what should be a dense shopping area and there were almost no vehicles moving. I think they had had 4 inches in total.

There were also scheduled outages and a scheduled work stoppage (that is, a planned strike) on the Tuble lines. We were concerned that it might be an issue getting to Wembley and asked a cab driver what a cab there would cost. When he told us "it would depend on traffic" and we could see almost no cars on the road, we knew that it would be a total rip off. We looked at the different means of public transport and decided to leave earlier and see how far we could get.

When we got to the Leicester Square station, we asked what "serious delays" meant and one of the many workers (wow, how nice to have workers!) told us a 10 minute delay. I laughed and felt a lot of reassurance:). 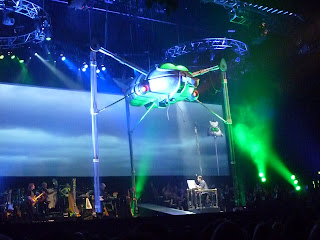 So we got to Wembley early and stopped outside the station at Subway. Why does Subway in Germany have meatball subs on the menu when none of the restaurants in Berlin actually serve them? I really enjoyed having all beef meatballs with jalapenos. Then on to Wembley, which is a charming arena. We had wonderful seats (all the seats had been freed by the promoter and press) in the 14th row and Wembley is set up really well— buying refreshments is made as easy as possible due to multiple kiosks. I had a cider and found it very amusing that the bottle was actually made of plastic! (Of course it makes sense, but why not serve it in plastic cups rather than producing non-standard plastic bottles?)

There were significant gaps in the further reaches of the Arena, which were probably due to the travel difficulties— at a guess they were bus loads of people that were not able to get in to London. A whole large family filed in past us a few minutes after the music started, with the apology of the dad that it had taken them 8 hours to get there.

I really enjoyed the musical. I didn't take any movies myself because I bought the DVD:). During intermission we chatted with the people around us and after the show we had backstage passes (part of the apology) which was also tremendous fun, although I'm too shy to really benefit from that. I did get an autograph and a picture with Jeff Wayne and got to watch all sorts of famous people interact while snacking and having a soda, though. We chatted with some folks from Zurich who were there for the same reason as us, but who had believed the "serious delays" and taken a cab. At 50 GBP, I'm glad we didn't! They joined us on the train back to London and we wished them luck on their flight back to Zurich the next day (which I am certain that they did not make, considering the chaos that was unfolding at Heathrow).