The Holiday whirl: In the UK, the National Gallery, Shakira and back to Berlin 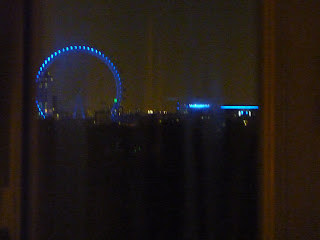 On Sunday morning we moved from the Holiday Inn to the Sheraton Park Lane (another freebie with points). What a difference. Right on the park, only a few blocks down from the tube station, gorgeous view. ( We could see both the London Eye and Buckingham Palace from our windows.)

It was also warm and had a real King size bed (rather than a pretend one, which is when hotel staff says the bed is king size but one knows it is not and wonders why they are lying.) 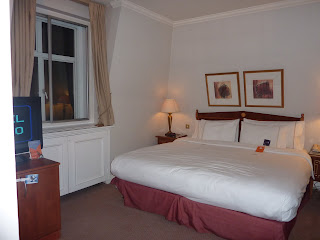 They let us check in super early (9:30 am) which was great as I hate leaving my bags at the desk and we needed to run off and meet a friend at the National Gallery. 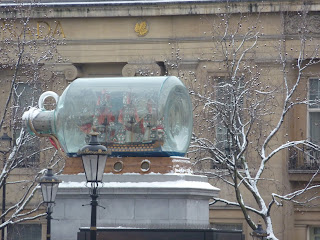 I particularly liked this piece of art that was outside the Gallery- I hadn't noticed that it changes but since this ship in a bottle wasn't here a few months ago, it must be a rotating gallery.

When we had made plans for the visit to London, the only thing that I really wanted to do (besides my usual wandering around and looking at things and having food without pig in it) was to visit the National Gallery. It seems that every time I go to London I go to the British Museum and although I could continue to do so for the rest of my life and not see everything (and although the design is fabulous) I wanted to see something more intimate and more focused. Because i fell in love with Venice last year when we visited (it really feels as if one is walking through a painting), this exhibit seemed particularly appropriate.

And did I really not talk about that either? Our anniversary trip last year in October, from Venice (as the acqua alta began) to Naples to Pompeii and then back to Rome, with the entire day lost wandering through the Vatican Museum and the final achievement (so many years after my four years of Latin) of spending the entire foot weary day wandering through Pompeii. I love Italy.
Since C works with museums, she put up with the amount of time it took me to wend through the exhibit: ever since we used the audioguides at the Vatican Museum and then at the Alte Pinakotkek in München, I have decided that they are really great and worth the time and expense (as opposed to many years ago when I first tried them and they were no more than the same words I would read on the displays) and this "guided tour" was very interesting.

Afterward we ate lunch at a pub and the cider that I had (in bottle) was over 20 oz- or 2.5 servings for a woman when looking at the guide printed on it. I had to give half to the German and I can see why Britain has an issue with over consumption of alcohol— the cider was cheaper (and larger) than the soda water he was drinking.
Then we said good bye at the station and wended our ways in the falling snow: a very pleasant visit.
In the evening we went to see the new Harry Potter and were amazed at how expensive movies are, but enjoyed the evening out then had a quick meal at the cafe in our hotel.
Monday we walked around the city a bit and in the evening we were off to the O2, again by public transport and again, although warned of problems, we had none. The O2 in London is amazing: a mall, a movie theater, an ice rink, a huge arena and much more. Also very pretty. 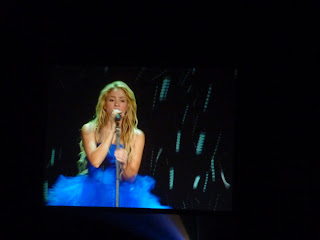 We had a bit of an issue at the pick up window (the clerk couldn't find our tickets), which was stressful, but at least this time we had a contact number which someone actually answered and they dispatched someone to clear up the issue, so the discomfort was the attitude that perhaps we were fibbing? A woman rushed up and asked the folks behind us if she could drop some tickets- she said she "played the violin" and the man asked, in his adorable British accent, if he would see her in the show. She said yes, which was an understatement: she had some amazing solos and was wonderful but my goodness- what a difference costume and make up made! I think the tour bus must have been very late, which also explained why the concert started after 9:20.
I had gotten the tickets to Shakira simply because they were free and we would be in London when she was playing, but I liked her act very much. What a difference between her and Lady Gaga! Her voice and range were amazing, her dancing was fantastic, and her dress was modest and her moves athletic and exciting. Gaga had a good voice and fun songs, but Shakira both surpassed her and was not profane or hypersexual: we enjoyed the concert very much. This was, I think, her last gig of the tour and we were surprised that the sold out venue started emptying out before her encores, perhaps because she started late. We stayed and enjoyed two wonderful songs and had no problems getting back on the Tube.

This isn't the best quality sound, but gives a really good view of her dancing. 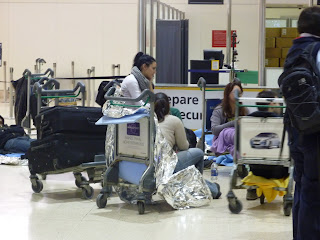 A few people still sleeping in the Heathrow terminal- we ourselves had no issues going out (an hour late), but they were triaging folks, not allowing them into the terminals without a ticket which was showing for an uncanceled flight, so it was a bit SFnal seeing the hordes standing outside the doors being kept back by security.Then security moved us to the head of the amazingly long luggage drop line because we were in two hours of departure. 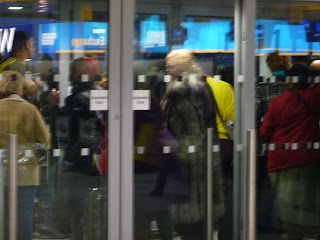 After that, everything went very smoothly and we got back to Berlin to discover lots of snow but no issues with transportation. It was good to be home.
Posted by G in Berlin at 12/21/2010 01:54:00 PM

What a wonderful holiday trip--and a great way to end the old year. Happy New Year, my friend--and I'll see you in Apanage!