Out by the (Winterfeld) Market

The Turkish market is not open on Saturday, which makes a lot of sense, if you think about it.

It was a very nice market, good looking produce (I bought champignons, beautiful cherry tomatoes on the vine, red onions and lovely garlic), nice cheese/dairy (some aged Gouda), a good looking herb table (mustard seed and sea salt- I couldn't figure out what turmeric was, so I'll go back for it), flowers, etc. Crowded market (so a bit difficult with a double stroller) and I will go back again without the children as it's just a few 100 feet down from 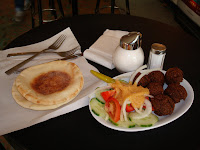 The Nollendorfplatz U-Bahn and thus an easy trip. Ed Ward at Hungry in Berlin reviwed this some time ago. He recommends as well another market in Schoneberg that I may try to check Wednesday.

Didn't take pictures of the market (though I may add some in next time I go) but the meal you see to the left is from:

Golzstr 24
Am Winterfeldplatz
10781 Berlin
2153332
So-Do 11.00-3.00, Fr+Sa 11.00-5.00
Yes, you read that right: open 7 days a week, between 16 and 18 hours a day. The service was non-existent (and you can't blame my Deutsche: the German did the ordering and asked the questions) but the food was really, really good. We had a felafel plate and the salad on the side had actually very, very good pepperoncini. You don't know how amazing that is: I have been trying for 6 months to get good hot peppers here. No matter where I have bought them, Greek places, Russian places, what appear to be Turkish places- the peppers have been blah. Not spicey enough, not crisp enough, not fresh enough. These were great. And I had mango sauce with the felafel and it was also very good: nicely hot and spicey. The children's chicken schwarma was delicious. I could eat there every day.

I had the German call to ask about where they get the peppers (the line was too long while we were there) but they were too busy to talk tonight and said to stop by. Man, it's almost worth trying it with a dictionary in hand: I may take a run back to the market on Wednesday and give it a try. 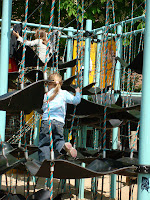 There is, as usual, a playground in the area. This one is very exciting, large, with beautiful flowering trees (lilacs now, looks like some others will be flowering later), a large baby area, another sand area, and a huge and exciting climbing apparatus. Whenever I see something like this I marvel at how this would never be possible in the states: it is quite dangerous in areas. There were at least two spots where Thing1 had to slide down because when dangling she could not reach the next level: if she had slid the wrong way, she might have dropped 10+ feet to the sand. Yes, the sand was deep, but still quite possible to injure oneself. 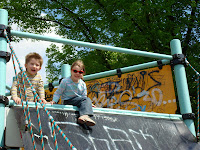 Thing1 loved it.
Thing2 did the (baby)slide over and over again after Thing1 came over and gave her confidence. For some reason, several children a few 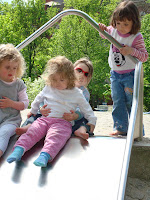 years older than she were congregating at the top of this (really, baby)slide and weren't getting out of the way to let Thing2 pass. After waiting a bit, I went to the bottom of the slide and called her and she came down.

I turned to one of the other moms, who was chatting on a handy while her 5 year old was standind/sitting/blocking the top and asked if she would mind asking her to either slide or move aside: she told me that because I was at thhe bottom of the slide, I was preventing her child from sliding. I said, "uh-huh", called Thing2 and caught her on the way down.

This seems to go to yet another of the cultural differences between Germans and Americans: they can be personally quite agressive to us (Put a hat on your daughter, how old are you. No, really. Are you going to have a child. Americans wear loud clothes and baseball hats. Americans are fat. Why doesn't your child x,y and z. You should do this with your child x,y, and z) but if we say "Would you ask your child to move, please, I find the fattiness of the butter hard to adjust to, I wish I could get peanut butter without sugar..." the answers are "No, it's your fault/problem if he doesn't move, American butter is terrible, all American products have sugar in them...." And then their feelings are hurt.
Posted by G in Berlin at 5/04/2008 07:19:00 AM

We hear Habibi all the time here... sweetie, sweetheart... I love you! LOL For us foreign chicks it is more insulting that a compliment.

Well, that explains why tere is a heart on the business card:-)

I understand exactly. My German s-i-l looks down his nose for the most part at most things/products American. Yet he is recognized academically here by Americans in a way that probably would not happen if he were settled in Germany. I think it's something about the shame associated with the whole holocaust thing . . . ? They need to feel superior in whatever way they can, and the things you point out works for them. (Don't take me too seriously, I mean no harm! LOL)