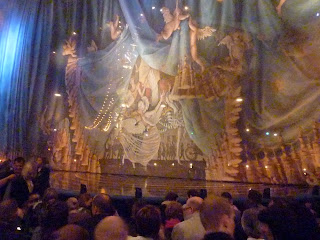 I spent the weekend in Vienna with a friend. It was a quick trip: I had been able to get tickets to Cirque de Soleil for Corteo this 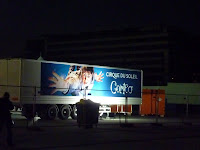 weekend and the German could not join me: he needed to stay home and take care of the children.

We used points and cash for the hotel and I got a great flight through AirBerlin (although I find it crazy that, two months in advance, it was cheaper for me to fly to Vienna than it was to use my Bahn50 card and be willing to spend more than 8 hours in a train!
The start to the trip was a bit bumpy, as the AB plane had a bum engine and after an hour on the tarmac we wound up being rejected by maintenance, deplaning and waiting for another plane. Luckily, Wien is a major hub for AirBerlin and they simply flew another plane over, empty, to carry us back. So, although just under 2 hours late (therefore not requiring compensation), I had the same seat. A high point of the flight was chatting with the very interesting musician sitting next to me: a NYer who is working between Berlin and Wien and who lives in a part of Brooklyn that I know. It was the friendliest conversation I have had with a stranger since I was last in NY and he took the three news magazines I read off my hands, always a plus:-).

I got in, went in to Wien Mitte by Cityline (a direct train from the airport to Mitte), picked myself up a 48 hour metro card from the vending machine, and went on my way. Wien is a small city and it was only two more stops to my destination: Oper.

When I got out of the station, I found myself turned around and stopped to asked a woman at a kiosk which direction to get to the number of the hotel I was aiming at: when she said she had no idea, I had a bit of a flashback to the last time I was in Vienna, in 1997, when I found it and Frankfurt to be the unfriendliest cities in Europe. This time however, I spoke bad German rather than the bad French I spoke then and I shamed her into at least agreeing that I was on the correct street, after her having said she did not know what that street was! A lovely woman at the next shop pointed me one block down and I was there in a second.

The hotel was charming and unusually for a Le Meridien, filled with interesting and cutting edge 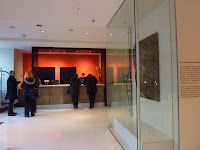 art, which I found humorous after having just visited the Daimler Contemporary. They had a 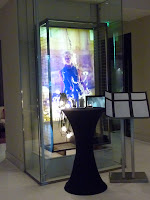 partnership with the Vienna School of Art and there were student exhibits as well as professional exhibits. One was performance art, with the artist dressed as famous individuals.

After getting in and resting a moment or two while enjoying the direct view of the Opera we had, we went to the Nashmarkt for dinner, where we wound up eating at a Thai/sushi place where we also ate the rest of our meals in Vienna (other than an in room snack and a cup of coffee in a coffee shop not far from the markt). It was a few short blocks from the hotel and on the way we passed some charming landmarks. The food was well spiced and I am always happy to eat Vietnamese: it's nice to have the request for spice responded to with chopped fresh hot peppers.

We ate there before the show as well, after walking through the attached flea market (where I picked up a very nice pashmina for 5€ and only wish I had picked up a few more).

Corteo was a charming show, as different from all the other Cirque de Soleils as I have come to 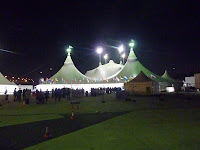 expect. It's quiet and beautiful and a bit contemplative, very different than Varrekai, which we saw in Berlin last year which was loud and chaotic and a bit frightening with its mad scientist them. This had angels and wings and a very Venetian look to it. There were lots of children there, so I assume people had read the description and knew that it was child friendly. We were lucky 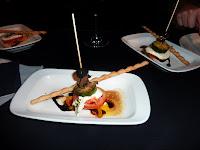 enough to have seats in the 6th row and it was great: it's really true that these shows are even more fun the closer you are. We were also lucky in that our tickets included entrance to the Tapis Rouge tent. I would not have been decadent enough to pay for it, but I really got a chance to see how the elite side lives. Very nice indeed, with our own tent, extremely nice food, unlimited alcoholic beverages (unfortunately wasted on a light weight drinker such as myself), our own vending and goody bags, 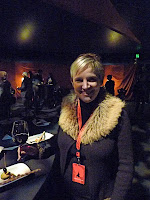 and meet and greet sessions with the star performers.

I persuaded my friend to take the U-bahn back to our hotel with me (rather than her preferred travel mode of taxi) and I was amazed at how empty the Viennese subway is: that's a town that rolls its sidewalks up early! We grabbed a drink and watched a movie.

The next day D had an earlier flight back home than I did, so I walked her to the Citytrain and put her on board (it's a personal goal to persuade her that trains are faster and more convenient 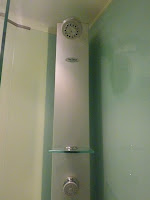 than taxis) than went back to the room to decide what to do. I considered wandering through the palace grounds or looking around in a city I haven't visited since 1997, but instead I took a shower in the amazing detached shower area with the 5 head vertical shower tower, then made myself a pot of tea and luxuriated in a Victorian style footed tub with what appeared to be an unlimited supply

of hot water (and I say that as someone who likes my water really hot). The tub was so big I could have actually taken a few strokes in it. I my have also lolled about on the extremely 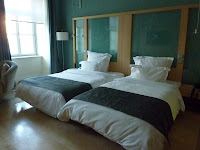 comfortable bed while enjoying the streaming sunlight through the window.

Thanks! And I'm a bit jealous of your new home!

Looks like a great trip. I absolutely love Vienna.