The Pergamon Museum and the 'Tell Halaf Adventure' 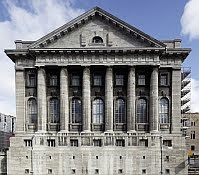 The Pergamon Museum is another of the Berlin State Museums. This collection of museums is just inspiring. Continuing on my quest to explore more of Berlin, we chose to visit the Pergamon
Museum (this Wikipedia link is out dated,it looks to be from 2006— sorry). 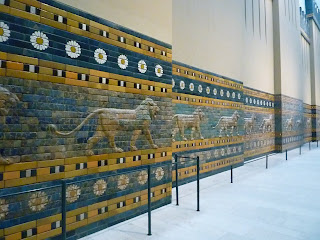 I took the quick tour with the audio guide (a bit over 30 minutes), which hit most of the major highlights: the Pergamon Altar, the Miletus Market Gate, and the Ishtar Gate and Processional Way (entering Babylon). The photos you see here are my own if not otherwise credited but they aren't as good as the ones you can see at some of these links. The huge architectural elements were overwhelmingly impressive. In particular, as I walked the processional way, which was actually only a fraction of the size that the real entryway to Babylon was (the real layout would not have 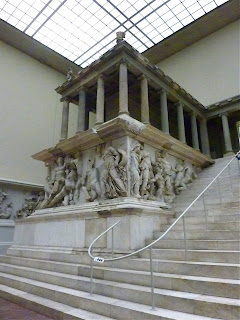 fit within the Museum). As I waked along the Processional way, realizing that the larger second gate was still in storage and that the majority of the artifacts were actually either in storage or dispersed in other museums, I was still in absolute awe. No wonder that Psalm 137:1 "By the waters of Babylon, there we sat down and wept, when we remembered Zion." Being brought, enslaved , into Babylon must have been the beginning of the process of mental destruction as agrarian herders were enslaved and
brought into what was an immeasurably more advanced 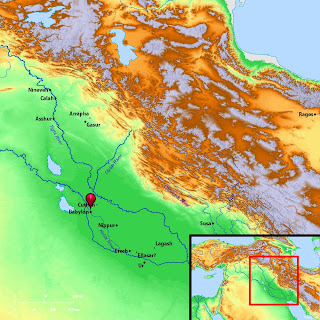 After spending time wandering in awe through these monuments, and hearing (through my audio guide) about the damage inflicted due to structural damage to the museum in the war- (particularly to the Market Gate, whose glass roof was destroyed, leaving the gate, which had been hollowed out for display, open to the elements), we were ready to proceed to the main exhibit: the Tell Halaf Adventure.

Tell Halaf was "discovered" by Baron Max von Oppenheim, the scion of a banking family who had no desire to enter the family business. Instead, he entered the German Foreign Service and was enamored of all things Middle Eastern. In 1899, he discovered Tell Half, adrift in the sands, and reserved a digging permit with the authorities. Interesingly, the exhibit makes it clear that he eventually reached an end point in his career because of his Jewish background and turned instead to his true love: a search for knowledge and understanding.
The on-line link says instead:

Ten years after the discovery of the tell the Ottoman authorities urged von Oppenheim to start exploring the site as French and British parties were now signaling their interest as well. Consequently in November of 1910 Max von Oppenheim handed in his letter of resignation to the Foreign Office in order to prepare the task that was ahead of him.

Not quite the same connotation.

In any case, the project is wonderfully detailed in German, English and French here
and well worth reading about. Baron von Oppenheim could have been Indiana Jones, except that he was an

ethical and extremely methodical archeologist, not a hit and run exploiter looking for a profit. In fact, his doting parents and the Oppenheim bank funded his work, while he painstakingly recorded the flora and fauna and native songs of the area, as well as worked with professionals at the highest level of science at that time.
Oppenheim worked with the government and his share of the excavations were brought back to Berlin, where he exhibited them at an iron foundry. There are wonderful photos and video of the 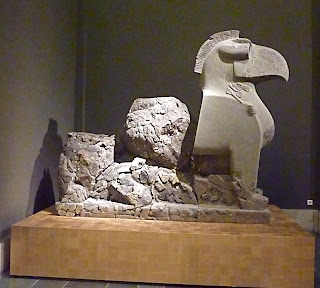 actual exhibits. However, in 1943, the foundry was bombed. The combination of extremely high temperatures and the water from the fire trucks made the basalt statues explode into thousands of pieces and the pieces were tossed in the basement of the Pergamon and other storage areas until after the fall of the Wall, when they were once again accessible and thought was turned to the possibility of reconstruction.
It's just sad how things that remained unbroken for 4500 years were destroyed and amazing how they have been reconstructed (where possible). It's not just the exhibited statues that are so interesting, but also the story, as we know it, that is so fascinating. Do check the project itself out.

(In a fascinating side note, the goddess statue that you see above is on loan, for the first time, from Syria. Because as they were assembling the fragments in Berlin, 60 years after the destruction, they discovered that some of the fragments which had originally been brought to Germany by van Oppenheim in the original separation of the findings, as per agreement,were part of statues that were partially assembled in Syria! After being re-shipped to Syria, this statue was able to be completely reassembled for the first time.)

What an interesting blog, introduced by a thought-provoking photo. The unusual wall painting of the dwellings is also a strangely modern interpretation. Something like this hieroglyphic view of a park by Swiss painter Paul Klee, http://EN.WahooArt.com/A55A04/w.nsf/OPRA/BRUE-8LT475.
The image can be seen at wahooart.com who can supply you with a canvas print of it.