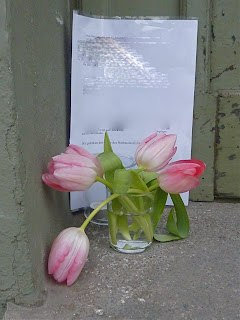 Every day as we enter and leave our apartment building, we step over what is called a "stumbling stone". This is a continuing and growing work of art by Gunter Demnig, a Berlin artist living in Cologne. This reminder of those taken and murdered by the Nazis began in 1990 with the trail of 100 Sinti and Roma taken and now is in multiple countries and continues to grow: So that none may be forgotten. Although I know her name, and repeat it, I have blurred it out here as it would identify our doorstep. But every day I see her name and know that she was taken from her apartment in my 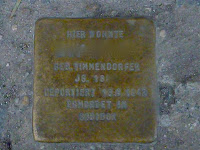 building to be murdered.

On the 27th of January, International Holocaust Remembrance Day, I returned from running the children to school and saw these flowers upon the step, with a tea light that had probably been lit the evening before. The sheet of paper that you see is the story of this woman, of how she was taken, of how those friends who had moved in with her after their own apartments had been bombed were then dispersed when this building was damaged in a bombing and how they then, each in turn, were taken and murdered in separate death camps by the NSDP.

(I asked someone else in the building who had left the memorial and they did not know. I can't imagine living here for years and not knowing. I'll ask at the Rathaus after school vacation. It mkes me feel better knowing that there are people who care to remember.)
Posted by G in Berlin at 2/03/2011 03:45:00 PM

Thank you for sharing this. In the midst of the chaos (and joy!) of our everyday lives, it's important to take time to remember.

G - this is a lovely remembrance post. A friend pointed out the stumbling stones to me a while ago and now whenever I come across one I always stop and read it. And think.