Where should unwanted books go? 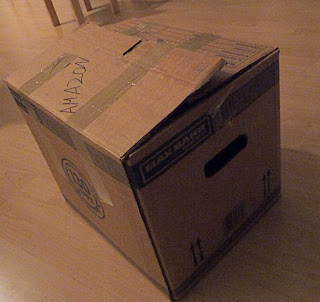 16 by 13.5 by 14 (inches, because I can't find my metric tape measure), holding 54 books.
I've been trying to figure out what to do with the books that I don't want to keep for ages. I have an innate inability to discard books that I think are worth reading (and perhaps even some with not so much intrinsic value). I also have a lot of books. At home, I would donate them to libraries, give them away, take them to my local hospital (my favorite), trade them at used book stores, offer them to friends.
Here, where I am generally wandering about on foot, I tried calling a few charitable stores such as Oxfam and Humana to see if they wanted my books. I was told to "bring them in and we will look at them".

Well, books are heavy— I don't want to have them rejected and then have to carry them home. I asked a used book store that specializes in English books as well and they told me the same thing. But really— I don't need to trade them in for store credit. At the moment I have too many dead

tree books floating around: my shelves are overflowing. I listed them on Amazon and sold about a book a week for the last two months: it's been driving us crazy having this box full and overflowing for months.

So today, while the German was here to provide the muscle, I called a library, made an appointment, and ran them over. The woman we had spoken to said that they would need to examine them first to decide whether they would want them, but she took all 54 and seemed very happy to have them: the German says that he thinks that she was very surprised at the condition they were in (near perfect) and that he thinks people attempt to donate books in terrible condition.

Freecycle can also be a good source to get rid of books, in a good way. I recently had some old (10 years+) business school textbooks that oxfam didn't want. Freecycle generated two requestors: someone doing a home startup business on a shoestring (who sent his very simple website to prove it), and an economics teacher who explained that their school library is always in need.

And in addition, with freecycle, people will pick them up. :-)

Yes, I think people do donate books in dreadful condition. Though I am basing this on my one experience of buying a second hand book from Amazon. It was described as being in 'very good' condition and when it arrived I opened it to discover the mustiest, damp-spotted, yellow-paged book I have seen in a long, long while. I could have complained, yes, but it only cost me 1p (+ £4.95 postage) and as it's out of print and a book translated by our book group guest next month, then I'm just going to peg my nose or read it outdoors.