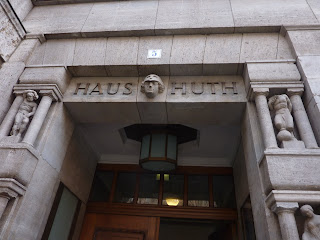 The Daimler Contemporary is a very interesting, very pointed gallery of modern art. It's quite small, at 600 qm meters, and is within Haus Huth, itself a very interesting space which has survived from the Imperial period and is still held in Huth hands.
The contrast between the almost unbearably modern display and the gorgeous early 20th century accessories was startling.

To my eye and to my thought, much of what I saw would better be classed as a type of performance art, rather than "real art". More design and graphics than what appeals to my heart. The 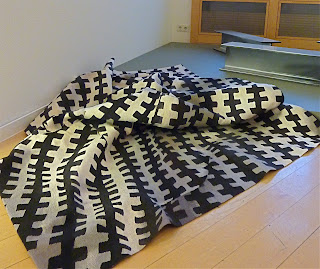 docent, interesting and literate as all I have heard in Germany, discussed the concept that this form of art is about thought and interaction, that its success is in making one think and struggle rather than in necessarily liking the art or even in believing that it is art. For instance, the first photo you see here was (to me) an interesting display of design and graphics that made a piece of art: the shadows that you see on the "steel" girders, as the curves and shadows that you see on the fabric, are both false, created with artifice.(Rupert Norfolk)
However, the next installation I have pictured was, to me, the peak of "performance art" rather than real art. What you see is a large selection of transformers and adapters powering two 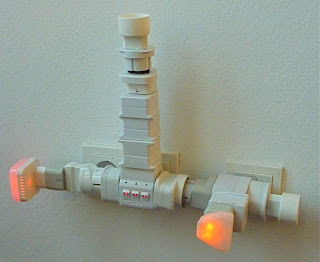 nightlights. This was displayed in the home of a woman who had never left her home state in Germany and the "wit" or "art" was in the juxtaposition of the two. I feel that if I need to read about why what I am looking at is art, than perhaps it actually isn't.

Before the guided tour, I had met up with a group from my verein and we had a set lunch at Lutter & Wegner.

When I arrived, I saw that the meal had been set and that both of the options offered included swine. That's an issue, as I don't eat swine and when I spoke to the maitre'd, he said that I should speak to our group leader, who had chosen the options.

So I did. A was a bit surprised, because she doesn't eat pork either. At that point, the manager offered to change up my meal to veal, rather than pork, increasing the cost by 50%. Rather than going into my philosophical issues with eating abused animals (as pate, veal is something I won't eat on moral grounds, rather than religious or taste), I simply said that I would rather not pay that much more and asking if the restaurant did not offer a vegetarian option. At which point I was indeed offered two of the standard vegetarian options and was more than happy to choose one. The maitre'd also told me that he himself did not eat pork, leading me to wonder why, in a city with a population of which more than 10% cannot eat pork, when offering a set meal with two options, one would offer only pork?

Perhaps the apple really doesn't fall far from the tree. I've never been a fan of minimalist, sidewalk or necessarily of performance "art", either. Somehow, art must connect to the viewer, auditor, reader and create a vibe cerebral, visceral or both.