Last night I was mobbed. 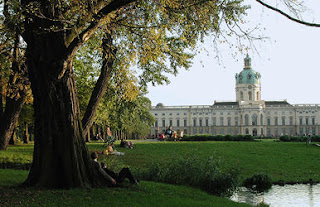 On Saturday we joined a walking tour around the Schloss Charlottenburg area. It was nice, but it broke half way through for a brewery stop. After the stop extended 45 minutes and seemed like it would last longer, we said good-bye and set off to retrace our steps to a pleasant playground that we had passed by.

One of the interesting things I find here in Berlin is that, just as it was much later in the summer when the sun set, now that we are heading into winter the sun is setting earlier and the time is getting earlier far more quickly than it does in New York, where I am from.

So dusk started to set in. I looked around and realized that the playground had become more crowded. When we entered, there were other parents with small children. All except one other child and her mother were Arab, but I really hadn't thought anything of the matter: it's not something I think about. There were women in full burqas, which I had noticed, but not cared about. However, now the playground had become much more crowded and the crowd was of much older children. To my eyes, they seemed to range up to 16, many of them groups of boys, and all of them Arab. Or, as we are in Berlin, I would assume Turkish. I still didn't care, until I saw an older boy running toward a group swinging what looked to be a baseball bat at the other children, some of whom scattered.

I had been taking pictures of my children, and I swung around and took a picture of the boy, thinking that he might be about to attack one of the other children and that I might need to call the police. Then I put my camera down and watched them to see if it was play or violence.

All of a sudden, a girl, about 14, came over with 5 or 6 friends, male and female. She started to yell at me in German. She and her friends started to push into my personal space. More of her friends followed her and soon surrounded me in a 3/4 circle (one of my children was behind me on a piece of play equipment, the other with the German across the playground, not yet noticing what was going on). The girl was asking why I had taken the photo and then demanding that I erase it. The boy, who was holding a broken chair leg (not the baseball bat that I had thought it- far more reassuring, of course) was in the group around me of twenty children, many of whom were taller than I. When I explained my concern about the boy swinging a stick at other children, she said that was her brother, it was all in fun, and I had better erase that picture and do it right now, while she was watching.

The German thinks that I have a defective fear reaction, especially because I had the kids with us. The truth is, I was just really angry. I was angry at their attempt to frighten me and to be in my space and to intimidate me. I should have been afraid, but I wasn't. Although I said that I would erase the photos, when the girl kept yelling and getting closer (although she never actually touched me) I stopped working on my camera (not an easy erase, a DSLR) and started speaking back. I whipped out my handy and suggested that perhaps we should call the Polizei immediately. Thing1 had started to notice and be concerned about the crowd, had stopped playing, and at this point was holding on to my leg and asking what the problem was. The boy holding the chair leg, who had been looking at the ground the whole time, at this point was telling the girl that she was frightening my child and to calm down.

The girl didn't back off, but the German and another older woman were quickly there (the German on the outside of the ring of people- he said he just had noticed this ring and walked over to see what was happening and there I was- inside it) and the older, ethnic German woman right next to me. The German waded in and started asking what the trouble was, the older German woman was talking a mile a minute. Seems the boy (and the girl) were her children, as was the little girl my Thing1 had been playing with, and the chair leg wielding was just a joke and everything was fine. But the older woman told Ernst that it was verboten to take pictures. He just agreed with everything, backed us out, put the girls in the stroller and we started to leave.

Of course, it's not true. It is not illegal to take pictures of a crime in action (and threatened assault is, of course, a crime, as is wielding blunt objects at others). It wasn't a religious problem, because none of the children involved were dressed modestly or concealing their faces. What it was was an example of the non-integration of Turks in Germany. This is why there is ill-will to Turks in Berlin (which has the largest- over 10%, or 350,000 people, foreign and Turkish population in Germany). This is a problem of lack of integration.

Before this incident, I wondered why we had been told not to look at apartments in this area: it looked very nice to me. Another blogger in Berlin lives three blocks from this playground, and when visiting them I had never felt unsafe. But now I would never go to this playground toward dusk, or after the schools let out. Before this, I had wondered at the lack of acceptance of Turks here. Now I understand where they are coming from. I still believe that the racism I see and hear is wrong, but I also understand the fear that Germans feel and we all know that fear translates oh, so easily, to hatred.

Ther is a real lack of integration here, a lot of which (I think) stems from the German view that the turkish immigranst were just guest workers and were not meant to stay or integrate.

There is now an almost vicious cycle at work here. The ethnic populations have suffered discrimination and racism, so they push back defensively and try and protect themselves and their own (which may have been why the girl responded aggressively), which makes the non-ethnic majority more frightened and then they act harsher, so the ethnic population gets MORE defensive.... and it all spirals downwards.

Wow! This was a very frightening experience, wasn't it? I'm wondering where it happened. My daughter and her German boyfriend (now husband) lived in a heavily Turkish neighborhood back in the '90s. It was within an easy walking distance of the Turkish outdoor market. I think Dr. J's comment has a lot of rationality to it, but it doesn't help when you perceive you or your family, especially your children, are in danger.

The famus Turkish market is by Maybachufer Strasse. It's a real tourist destination but a very heavily Turkish area. The area I was in was an area I had thought was fine. It was all a bit stressful and I'm just glad that it's over now.