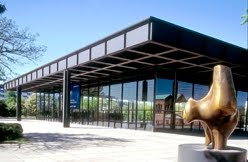 © Staatliche Museen zu Berlin, Foto: F. Friedrich
I'm glad that I arranged to meet a friend after my yoga class to see the New National Gallery, because today (Friday), I'm already stiffening up. Interesting that the serious pain is now in my arms rather than my legs.

In any case, continuing on my goal of really exploring Berlin, my friend chose the Neue Nationalgalerie for our visit this week. A very interesting look to the museum, which was 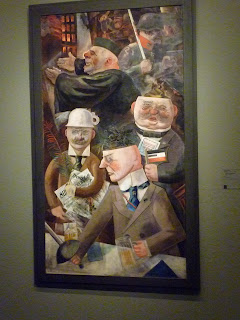 designed by Mies Van der Rohe and opened in 1968, his last work.

After seeing the New Museum, which opened last year, it was fascinating to see the difference in architecture and to see how different the New National Gallery, considered a symbol of "modern architecture" when it was built, differs from the former. The latter is built to display Van der Rohe's genius and the former was built to display, as functionally and beautifully as possible, the contents of the museum.

There were some lovely painting there and, as usual, the audioguide was enlightening and informative.

The work to the left, George Grosz' "Pillars of Society" or "Stützen der Gesellschaft" was just amazing. 1926. Wow. I think I have seen some of his work in NY and from reading about him I see that he was a member of the Dada movement. 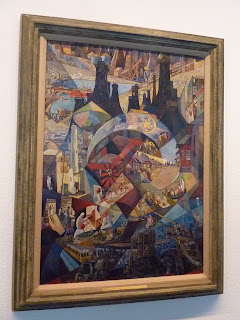 In a different vein, this painting "Baku- Agitationstafel" 1927 (and others by Heinrich Vogeler). Interestingly, the Wikipedia entry appears to be incorrect. Rather than being deported in 1942 by Soviet Authorities, he was fleeing the Nazis when he died (or at least, that is the truth according to the German government, which one would think would choose a less damaging story, if it were true). Here I find a style that in the US I knew as Depression era artwork (Federal Art Project work and New Deal artwork), of whom the most iconic would be Thomas Hart Benton. I am very fond of this style of artwork, perhaps influenced because the style was used on so many children's books which I loved 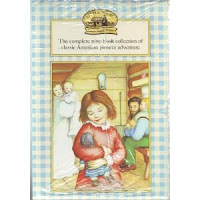 when I was small. 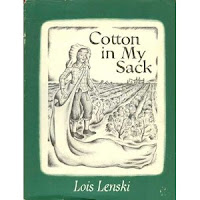