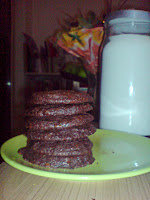 Another week joining my fellow Tuesdays with Dorie bloggers as we bake from Dorie Greenspan's Baking: from my home to yours. Today's recipe, World Peace Cookies, was chosen by Jessica of Cookbookhabit. That's a habit I share (along with garden books, sf, novels, travel books and expat reads- in fact, I am a bit of a reading addict) so I was glad to have a chance to check her site out.

The cookies, apparently based on a Pierre Hermes recipe, were an interesting recipe for me. I am finding cooking through this book fun because in so many cases I am cooking recipes that I would not choose: I am just not a chocolate lover. As I read the recipe, I saw that Dorie called this a variation on a sable (as were the Linzer cookies we made several weeks ago). Yet, this recipe included no eggs or fluids, unlike the other recipe. I also saw that it had a good 1/2 tsp of Fleur de Sel, as does the New York Times Chocolate Chip recipe (highlighted in my side bar) which is my current favorite cookie recipe (I especially love the sprinkling of sea salt on the top).

As I put the recipe together, and read the discussion, I saw that others seem to have had a problem with the texture being too crumbly. When I was done with the mixture, what I had in my bowl was actually what looked like a mess of flour (chocolatey flour, but still it looked as if there were no fluids). (I used my hand carried Dutch process cocoa- anyone know where to find it in Germany and what it is called?)

Although the recipe warned against overmixing, I kept on trying to beat the butter throughout the "dough".

Then I gave up. It looks as if later in the day some suggested removing a little of the flour prior to mixing, but at this point I just tossed in an egg. After mixing, when it still didn't look moist enough to roll, I added a few glugs of non-fat milk (that's what I had in the fridge). That brought it together as I stirred in a scant palmful of chips. 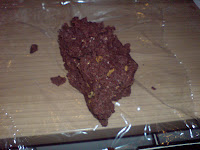 I separated the dough in two parts and wrapped it in Saran wrap. I then rolled it (within the wrap) into logs. 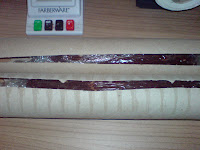 Here is the brilliant tip Dorie gave: take two paper towel rolls (what, doesn't everyone collect them for children's craft projects?), cut one side open, and put the dough "log" inside. This shaped it perfectly as I put the logs in the fridge. The recipe calls for a 3 hour chill, but I left it overnight and baked the cookies after my class this morning. 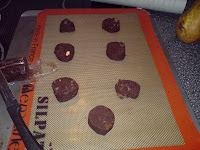 I preheated the oven to 160C and then cut thick (between 1/4 and 1/2") slabs of the cylinder onto my Silpat sheet on a cookie sheet. 12 minutes exactly later and I pulled them out. The half of the dough that I used (the other log is still in the fridge) made 11 cookies.

After cooling, I tried one. The cookies are surprisingly light and tasty (not too sweet). I assume the lightness came from the added egg and milk, because som of the other bakers are mentioning a density in their cookies?

Love the idea about the paper towel rolls! Your cookies look great! :)

I love these cookies! I am craving them now!

Thanks for visiting my blog and baking along this week - your "hacks" worked very well! They look wonderful.

I was surprised at how little liquid was in this recipe too! Looks great!

In response to your request about places to stay around Disney, unfortunately I don't know of any agencies. The one time we stayed at Disney was at the Animal Kingdom Lodge and it is just a hotel (not great for long term). My sister stayed at a condo/apartment place through her timeshare and I'll ask her for the name of the place. If you want the info just send me an email at flhexe@yahoo.com and I can send along a link.
Kississimme isn't bad, but you do have to cross I4 to get to the Disney property. Also, Disney is on the west side of Orlando, do not stay east of downtown Orlando because the traffic through downtown is bad. I'll ask a few other people and let you know what I come up with.

Wow!! You did have major problems with this one. Glad they eventually turned out for you. They do look good.