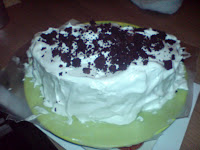 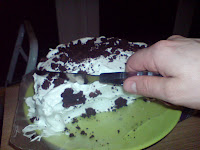 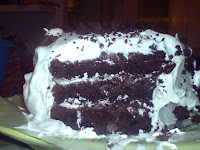 I have been starting to wonder whether I am cut out for Tuesdays with Dorie. I have had a few failures and a few items I really didn't want to make and I am starting to think that there will never be a recipe that doesn't have chocolate in it (which is bad, as I don't like chocolate).

But this recipe, chosen by Stephanie of Confessions of a City Eater, was exactly the type of recipe that I was looking for when I joined. It had a frosting that I had never made and it was just gorgeous looking. 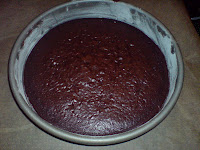 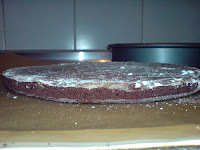 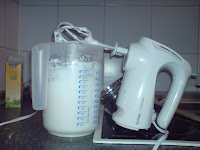 As usual, I had functional deficits: it seems that all the recipes in the cookbook require the use of a stand mixer or a food processor. So I used my hand mixer. I have imported cream of tartar: that was the missing ingredient covered.

I didn't think that I had brought my candy thermometer with me and the marshmallow frosting required the use of a thermometer so I sent the German out to fetch one on Saturday when he and Thing2 did some shopping. He couldn't find one and, of course, there is no Sunday shopping for that type of frivolity (food stuffs can be found in markets within train stations that have short Sunday hours) but today I looked through the last two unopened boxes from the US and found my cany making oils and equipment, including the thermometer.

I had only 1 8" cake pan but that was fine because my oven is actually too small to take two so I baked the two required rounds sequentially. As did many others, I found that the cake rounds were extremely flat. I'm not certain if this was because of the 1/2 cup of boiling water that the recipe called for toward the end of the mix- would it have risen more without it? In any case, I have annotated my book to read that next time I should use 6" pans. The rounds were too flat to allow me to slice them through and make layers, so I cut leach layer instead in half and then stacked three demi sections, retaining the fourth to crumble after frosting the layers (that demi section was large enough that I used only half of it for crumbs and cut and stacked and frosted the rest to be mini-cakes for the girls).

The girls both had tremendous fun licking the beaters for the frosting (I let it cool first) and then watching me frost. They greatly enjoyed making crumbs and then applying them to the frosted cake. Thing1 adores it and Thing2 likes looking at it: after a while she gave her piece to her older sister (who is now agitating for another slice after dinner). 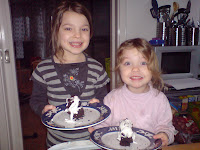 For me, too sweet and too chocolatey. A huge thumbs up from Thing1 and the German though and the cake is extremely attractive to look at.

Looks quite yummy! If there's any left by the weekend, can ya bring some to me?!?

Wow, yum! Your girls are adorable.

I swear everyone in the blogoverse knew that i just started south beach and was finally going to start catching up on blogs today. Dang that cake looks good!!

I think it looks great, especially having to work with a hand mixer, that's a lot of work. We really enjoyed ours :)

Your cake looks delicious! Great job with the hand mixer!

Boy does that look yummy! It's funny, I have a stand mixer but I halved the recipe so I thought I'd try out making it with the hand mixer. It was OK, but I definitely prefer using the KA. Your girls are adorable!

Great job! It was extremely sweet, though! Glad your testers liked it!

Thanks! Hungry is better than nauseated!
I think I will be hand carrying a Kitchen Aid Stand mixer back from the States next month. I have a craving to make marshmallows and I am not willing to beat syrup by hand for 20+minutes. Anyone know a good vendor of transformers in Germany?