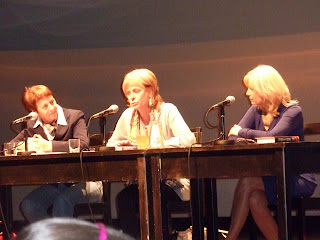 I went to see Kathy Reichs at the Internationales Literaturfest Berlin.
(The woman who read from her novel in German was Sabine Postel (on right) from Tatort, has also read the audiobooks for Elizabeth George's books here in Germany).

Luckily, I anticipated the fact that there would be no translation from the German to the English (as I found with AS Byatt) and I was once again surprised that, even though I cannot read a neighborhood newspaper in Berlin, I can understand a good deal of German in a literary setting.
The reading was from Flesh and Bones/ Fahr zu Holle.
Quite a bit of what I will be writing below is paraphrased, or taken from my quickly jotted notes while listening.
Question: How much of your writing is from your own experiences?
Answer: Everything comes from her own case knowledge. Her first book was based on a case in Montreal, the second (the exhumation of a 250 year old body for teh Catholic church and a sun worship murder in Quebec), etc.: they are always based in her own experiences.
Question: How do you choose where to place Tempe?
Answer: It's where I've been— Israel, Chicago, Guatemala. In book 15, Yellowknife, where I just went to a literary festival.
Interviewer:"Where Kathy goes, geht auch Tempe mit.": She has always been to the place she is writing about.
Question: Are your books more plot or character driven?
Answer: They must have all three: Setting, character, and plot: the ultimate bottom line is the story.
Question: Why NASCAR?
Answer: Because I live in Charlotte, NC and that's Ground Zero for NASCAR. It started in our hills with bootlegging runs. First to outrun the police , then Revenuers, then it became a sport.
Question: Have you had strange cases like the one you write about here- what were your strangest cases?
Answer: We have had cases of bodies in cement barrels, although not the asphalt I write about here but I think the forensics would be very similar. Hell's Angels biker wars formed the real background of my use in my 3rd book.
Question: Why did you start writing?
Answer: Mainly for fun but also to bring science to a wider audience. I very much wanted to show a strong female character using science. That's also why she wrote Virals , her YA. She finds it amusing that her French publisher has labelled it age appropriate for 92 and younger, while her English publisher has it labelled for 12 and older. The lead character in Virals is 14 years old and is Tempe's great-niece, the daughter of he sister (met in 3rd book) Harry's son Kit.

Kathy then discussed her plot concept, that there is usually an A, B, and C plot, with the C plot being emotional. There is also often a political issue, which in her current book is right-wing extremism. She mentioned the Atlanta Olympics bomber, Eric Randolph, who hid in the hills of NC with help from right-wing extremists. He set the bomb in Atlanta, blew up abortion clinics, and gay/lesbian bars. He was eventually found eating from a dumpster.
She also talked about Bones, the TV series which is based (loosely) both upon her and her series of books. This season is starting late as the lead is exoecting a baby on September 22 (which has been written into the season): she has done some production on the series and enjoys it. While the TV series is in production, 21st Century Fox has the rights to the character and she is not available for movie options.

Question: How does one get into the field?
Answer: In Germany, there are 250 pathologists and far fewer forensic pathologists. Dr. Reichs started as an archeologist but police kept bringing her cases and she liked the immediacy of actually helping people and changing lives, so she re-trained and Board certified.

Afterward, she kindly signed books for us, including both her YA (which I bought in German, hoping I might be able to understand it sometime in the next few years!) and two English ones. Very kind and charming in line, generously speaking to those of us who could say something in English.
Posted by G in Berlin at 9/15/2011 11:47:00 PM