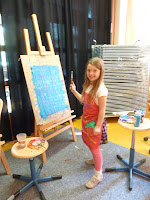 am amazed and grateful to be living in a society that believes that art and an appreciation of it are a human right and one that Society (with a capital S) should extend to children.

Thing1 had been taking quite good art classes in the Friedrichstrasse area (not too bad by S-bahn), but those classes were preceded by a ceramics class which apparently had some sort of glaze or clay ingredient to which she was allergic: although she enjoyed it, she was displaying contact dermatitis quite severely (an issue she has had all her life). In addition, T2 wasn't allowed to participate (too young) and the classes ended late, so T1 could only go when the German was in town and able to take her.

Toward the end of last school year, T1 said that she wasn't learning any more and she wanted a different class. So I did a huge amount of looking around (and a good art class for young children is actually quite difficult to find) and discovered that my kiez (neighborhood) sponsors art and culture for children through the VHS system. Of course, my neighorhood is larger than all but 19 cities in Germany (there are 19 cities in the country with more than 300,000 inhabitants) so it's not surprising that there are some amenities.

What's amazing is that as we bail the southern countries out of the hole that they spent themselves into (through graft, corruption, black market dealings at all levels of society and outright cooking of the books), Germany still finds it important that being rich or poor should not alter children's access to cultural enrichment: the latest welfare (Hartz IV) reform laws included funds to allow even the poorest access to music and art lessons and appreciation, as well as to forests and farms.

The new class teacher allowed T2 to join in, even though she is 6 months younger than the limit (as 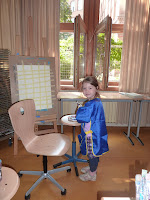 otherwise she would be sitting outside with me through the 2 hour class) and she is having a blast: the first time they went, I was in a class myself, and the German didn't bring any mahlkittles. That was swiftly corrected (through the loss of that dress) and the second class had them both wearing art smocks. They were out of the large smocks and we thought T1 could just wear an apron... wrong. Her new style is in the footsteps of Jackson Pollack and the speckles went everywhere: she will 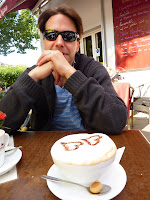 have a long-sleeved full size smock this week.

The best part is that the class is in our neighborhood, only a short U ride away, that there is a great cafe across the street (and a Thai place a few doors down) and that now the kids can attend together, giving me a 2 hour block when I can read or have a coffee rather than running around, stressing out because someone will need to miss something. The down side is that when we shuffled the swim classes to free Friday for both of them, they came up consecutive. But consecutive is still far better than on separate days, as they were last school year!

So now we are settled in to our schedule and until T1 earns her music lessons back (through doing her homework cheerfully), it means that we have two days home by 4 pm (when she has nachhilfe) and 1 by 5 pm (after tennis): a huge improvement on last year!
Posted by G in Berlin at 9/02/2011 10:30:00 PM

As long as everyone is having fun, yay!

I remember when I was in high school, the Theater des Westens (and possibly other venues) always had blocks of heavily discounted tickets for students during the week. There'd be a sign-up sheet on a bulletin board at school and it was first-come, first-served. I saw many excellent plays and musicals that way!

I am so I expressed. I am totally Intimidated about finding classes for the girls. Now that clair is almost three, it is time to start getting on it. The VHS is a great idea! I used to teach yoga there, and they had some great resources.