The Hokusai Retrospective at the Martin-Gropius-Bau 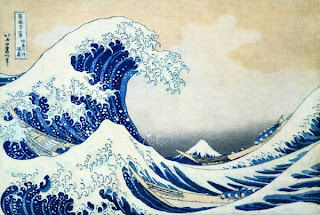 The Great Wave off the Coast of Kanagawa
From the series Thirty-six Views of Mount Fuji
Date of Origin: c. 1831/ Period Iitsu
credit: Sumida City

It's been a chaotic bi-month so far. Sometimes I feel like I am running with spinning wheels where my feet are but I am going backwards instead of forwards. Something like Wil E Coyote on a bad day. But today, after dropping the kids off and having some blood drawn, I met a friend and we went to the Martin-Gropius-Bau for the current exhibition, a retrospective on Hokusai.

This time, when I asked, they said "no photographs", so the above is courtesy of the exhibit, not my camera (though I saw some folks taking pictures...). It was crowded, especially in the first room, where there were many small prints and "manga" book prints that took a lot of time to study and read. The crowd spaced itself out better after the first room and there were some classic prints, many from rarely seen private collections and many illustrations and prints that have never been seen outside Japan (and that will return after this exhibition).

The exhibit, "the first time in Germany a major retrospective is to be devoted to the world-famous Japanese artist Katsushika Hokusai (1760–1849)" is one of several events designed to mark "150 Years of German-Japanese Friendship" and is organized "under the auspices of the Japanese Embassy".

The final display is a video showing how wood-block are created, in the traditional manner, and how prints are hand-created. I found the discussion, display and information on the foundation devoted to preserving this craft and art as well as fostering the training of new artists, to be fascinating.The creation of the print is a work of individual artistry and high skill (as well as authentic technique) in itself.

Although the Martin-Gropius-Bau is not a State Museum, and is therefore not accessible through the Jahres (annual) card, the exhibit (free to 16 and under) is worth the price of the admission. The audio guide, at an addition 4€, was not. Shockingly thin, with a lack of in-depth knowledge, interesting societal facts or contemporary music, the guide was a huge disappointment, my first bad audio guide in 10 years and not worth almost half the admission cost!
Posted by G in Berlin at 9/14/2011 09:27:00 PM

Wow! I am a big fan of japanese wood-block printing and the views of mt fuji series is certainly iconic. I'm glad your visit to the exhibit offered a bit of respite from a hectic couple of months.

Oh I really want to go to that. And thanks for the audio guide tip: 4 Euros saved!

The Minneapolis Insitute of Arts is going to have an exhibition of 150 Japanese prints later this year and I'll have to try to get there. The Rembrandt show next year looks like a must and a yaer from now terra cotta warriors from China will be on display.
I suppose there ought to be at least a few Hokusai prints there!