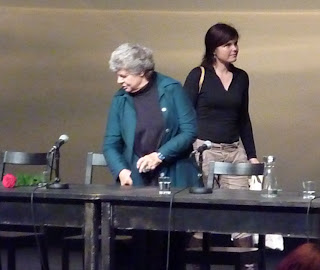 My book club had read The Children's Book by AS Byatt this year, so when it was announced (in our forum) that she would appear at the Internationales Literaturfest Berlin, I decided to join in and come along to listen.
This was the first time I had visited the festival since our move and it's really close to us: so close that when I got off the U and looked, there was an arrow pointing in the right direction. But above ground, I couldn't tell where to go and it was raining. So I stopped and asked a Bus driver, as he was smoking outside his bus: his answer, "I don't speak any German." Sigh. Two folks later, I was pointed the right way and was there in a second.

I met two fellow club members beforehand at the box and then we wandered off to find a place to have a bite and a drink. We wound up only a few blocks away at a charming wine place (clearly its specialty) which also had a small but lovely food selection. However, in typical German fashion, although we had asked if the food would be prepared in time for our deadline, it wasn't and we wrapped our (delicious) deserts and took them to go (I enjoyed mine that evening after getting home).

So, even though we rushed, we entered the auditorium an embarrassing few minutes late, after Dame Byatt had started reading (also from The Children's Book). The first thing I noticed, was how starved I am for real language: language that stretches the mind, that evokes pictures, that is multi-syllabic. As Byatt read a section describing the English countryside, I sank into the beauty of her words and my mind soaked it up, like a sponge that did not realized how parched it was. When the German reader spoke the same section, I was absolutely amazed that I understood most of it. No, my German is not that advanced. What this made clear to me was how beautiful and complex and large the English vocabulary is, and what a paucity of words German has in contrast. Really, to be as complex and evocative and interesting, to set the same tone as the English, I should not have been able to understand a word of the German: the German reader is being cheated of the beauty of the language (though not the complexity of the plot) if she reads this (and so many others) in translation.
I wonder if it is as bad from German or Spanish or Italian when translated to English? I read a translation of a Rainer Maria Rilke poem on a blog recently, with the original, and I realized that the English translations didn't do an especially good translation, although much more so when the translator tried over hard to maintain the structure of the sentences instead of the translation. And that's why I own certain translations of the Iliad and the Odyssey (Fitzgerald ) and not others.
So, on to the discussion. This is paraphrased and from my hastily jotted notes (I don't know shorthand, so I vouch only for the gist). In addition, much was in German, and the translation ran only the other way (from English to German).

Byatt was particularly interested in the "concept" of Museum. E. Nesbit (whose life is a basis for the novel)went to the British Museum to do research, fell in love with a curator and had an affair with him.
So, Byatt explored a museum. In her case, not the British Museum, but the Victoria and Albert (which I have not visited but will most definitely do on my next trip to London). The curator (with whom she did not have an affair) took her to the basement to show her the silver and the gold: she found it fascinating and fell in love with the museum. Now the Museum asks her to write articles for them: it was a reciprocated love! She learned that the V&A was originally run by soldiers who tunneled.
" I think fairytales are another way of telling the human story." "Deerskin" is the story that haunts the whole novel: the Grimm story of the king that wishes to marry his own daughter. Recurring metaphors of gold and silver (as the dresses), which lead to the real thing, which led to death. The archetypes of Märchen(fairytales) in the novel, the flight of Peter and his mother, Hansel and Gretel: Märchen are not a second world, they are part of us.

"Does Olive consider Tom an object? Does he have a chance for an independent life?"
No, she absorbed him and rejected him becasue her writing was more important to her. Childrens writers write for their own "child within" and exclude their own children. Tom "protects" the other children by taking so much of her attention.
Byatt spoke a bit about famous Childrens authors of the period: Allison Uttley, whose husband killed himself and whose son also suicided; Kenneth Grahame, whose son went blind while he didn't notice. His son then killed himself after his first test at Oxford.
The German puppeteer , Grimm, lives in Märchen.
"I have a moral belief that we all live in a world where things have a past."
Byatt thinks of characters as "mushrooms in a wood": they grow up as they will.She has the character before she starts writing, but can still be surprised on every page— but not the same kind of surprise.

ASB: "Dickens said " You put yourself in the body of the character and look through their eyes to see the future..."."

A great line to end the discussion.

Found another friend in the line to have our books signed, had a wine, and was home to relieve the babysitter after a lovely evening.
Posted by G in Berlin at 9/08/2011 01:12:00 PM