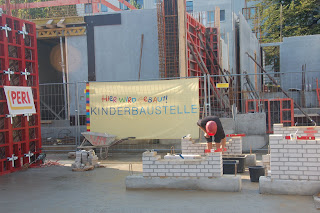 I try hard to build better memories for this date so when we saw an opportunity to enroll in a KinderBaustelle on this Sunday, we leaped at it.

There had been a kleingartenkolonie in our neighborhood which was, after years of fighting, sold

by the community to be housing. (This area could actually use some). In any case, in a neighborly gesture, the company advertised a Children's Building Activity. Free but requiring registration and we jumped on that. It was possible for either

Saturday or Sunday, but as I said, we try to build better memories.

It was great fun.

As you can see, the children had appropriately sized builder's

gloves and hard-hats and t-shirts and because we were a limited number, every child got to be part of every building area. No hurrying, no worrying, no stress: just calm and interest and attentive Baumeisters and Azubis, both male and female. For the grown-ups (and the kids who could be torn away), juice and sodas and milk, coffee tea and pastries, bagels and cream cheese and wurst and belegte brotchen.

I'm not certain the girls are now thinking of the possibility of becoming bauarbeiters, but they (and we) really enjoyed learning about how it all works (quite differently here in Germany than in the US) and the kids used a backhoe, a crane, a cement crane, laid ceiling tile, worked on re-bar, pounded stone and had an all-around super time.

We really enjoyed it. I wasn't feeling well but the German shadowed the kids and I managed to take a few photos while drinking some weak coffee. We left with goody bags and a filled out activity sheet (the girls love being marked off as they fulfill all the stations).

What a lovely new memory on a day which seems, achingly, to always be beautiful.

Looks like the day was great fun - sorry you weren't feeling well though.

Thanks- it was a sunny, beautiful day. Strange for me to remember that the date means nothing to the children.
Waiting for more posts from you!