What I've been doing for the last month: A-ha and Amsterdam 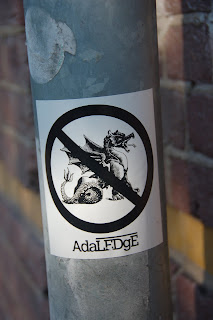 Actually, I've done a few other things in that time as well. I'll try to get those posted as well.

We went to Amsterdam for the weekend because, after I procrastinated for so long, the cost of driving to Amsterdam was cheaper than me buying a train ticket, even with a 50% discount on DB. Since we were driving, we brought the children along. Luckily, the German had some points that brought us into free nights at the Hotel Pulitzer in Amsterdam. This was just as charming and quirky as one might expect from the description: multiple 18th century townhouses merged into a charming hotel. We had a room looking into the garden (no canal view:() but directly facing on a play set. This was important because we later discovered that Amsterdam has a sad paucity of playgrounds: the major one in Vondel Park, the largest park in Amsterdam, couldn't hold a candle to any of my 5 local playgrounds here in Berlin. They still enjoyed playing there, though.
T1 kept asking to be in T2's stroller and we were a bit intolerant (she's heavy!) considering how much walking around we did and that she wound up being sick the following week, but we still enjoyed ourselves. We spent the whole weekend walking around enjoying the blue sky and the 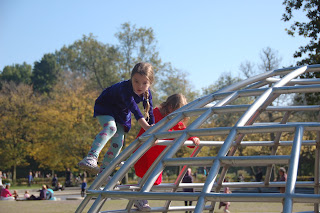 wonderful weather and looking at things (with an tram ride and 1 boat trip). I love Amsterdam and I love the architecture there.
We had rijstaafl one evening which was lost on the girls— we wound up buying them a bowl of rice each to make up for all the items they didn't like.

The actual reason for me going to Amsterdam was to meet up with a friend who was there after doing an Art residency so deep in Ireland that I couldn't meet her there: 12+ hours travel time to reach a village in Ireland just wasn't manageable (and that would be plane to train to bus to walking or taxi the last thirty miles!). I had the chance to grab some tickets to A-ha's final tour the weekend she would be in Amsterdam and I thought it would be amusing to do that.

As it turned out, J was ill the evening we were to go and the German and I wound up getting a babysitter through the hotel (he had expected to watch the kids that evening). The sitter was lovely, fully multilingual and the cost was the same as a babysitter in Berlin, so we were very happy.

The tickets were supposed to be special, and after a bit of confusion at the Heinekin Arena box-office, we discovered why: we were directed to the VIP entrance. There we were given colored arm bands, offered a free check for our packs and coats, and shown to box seats where there was a free bar. If we'd known that was what "special" meant, we would have shown up earlier!

The concert was fun, even though I really didn't remember very many A-ha songs beside the most famous iconic MTV videos. But there was a lot of energy and a lot of dancing and it was nice to be out with the spouse.

What fun! I'm taking my hubby to Glasgow, from Munich, Dec. 10th to a "Simply Red" concert. Dates us, I know. But he loves them. Glad you were able to go.

I hope you have a great time! And if you want to talk about dating oneself, I'm dragging the husband to London next month for the 35th anniversary tour of War of the Worlds:). I wonder if they will retain the Richard Burton voice over?