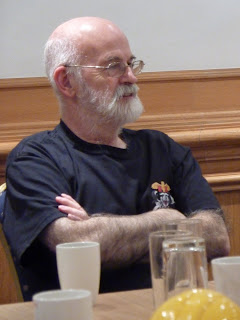 Back in August, I dragged the German off to Discworld Con. He enjoyed it, although not quite as much as I did. I was lucky enough to be able to participate in a Kaffeeklatch (as I did in San Antonio, although whether at Nasfic in '87 or Worldcon in '97 I have no idea!).

As I mentioned, the con was giving away a large number of Sir Terry's books and the ones we kept were those in German (there were no English editions available). The German has been in a relatively non-reading frame of mind for years (magazines, business books, an occasional novel) so I have been flabbergasted to see him working his way through Die Farben der Magie, Das Licht der Phantasie, Das Erbe des Zauberers, Gevatter Tod, and MacBest. Those are pretty strange for me to look at in German, but are a darned good start to reading through the oeuvre.

After reading Gevatter Tod, the German was pretty upset to realize that although we still had 9 more German books (and I have 6 others in English here) the others are not in order. So I gave him MacBest, which is in the Witches cycle and we tried to decide the best way to handle the problem. It's obviously not cost effective for me to fly back to the US and get my Pratchett books out of storage and send them over here. Even if I were in my storage unit, it would take an entire vacation to dig back through it and go through the 100+ boxes of books until I found the right one. It's really quite shocking to look at the cost of replacing quite a lot of books that one already owns, even in paperback. I took a look at buying the e-books and it might be possible to do so with a British residence— or while in the UK— but he'd rather not read on his phone or even another reader.

However, although I never saw the multi-book collections in the US, in the UK the books were reprinted in 2 to three novel groupings. So I ordered the next grouping for him (along with a copy of the Malory Towers collection for Thing1) for him, delivered to a co-worker in Wales and hopefully in his hands at work on Monday. The price, divided over the three books, and even including the cost of shipping (not free because through a third party used) is still a lot lower than buying them here in Germany. I am looking forward to being able to reread these myself and I'm really curious to see how the German feels the difference between the translator and the original works: he thinks the translation was great but now he'll really get a chance to see.

There are 35+ (and counting) for the German to enjoy, but after that, I wonder where we will go? Shall I try him on Patricia Briggs or move into CJ Cherryh? Or Lawrence Watt-Evans, who has the type of whimsy that Pratchett so exemplifies?

I got my German onto Pratchett at some point and he's read them all in English now (and collects them more eagerly than I do!). He's not a SFF person, so it's been tough to find other stuff he enjoys, but he's really gotten into Jasper Fforde. Even if he doesn't always get the literary references, whismy and absurdity are certainly a part of the Thursday Next and Nursery Crimes books.