What I've been doing for the last month:Halloween 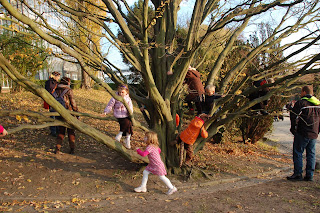 The holiday that we miss the most is Halloween.

Halloween in our old home is one of T1's favorite memories: our small area was a mecca for trick or treaters, with a large number of the people in our neighborhood putting time and attention into Halloween decorations, themes and motifs— even more than for Christmas. Here in Berlin we have tried trick-or-treating in Zehlendorf (the kids found the sheer density, as every Berliner with an interest descended upon this once American area, overwhelming), a private party (nice, but too old and thus too frightening for them), and this time we tried going to the Botanical Gardens.

This was quite a lot of fun and I think would be even more so as the children get older. T1 still reminisced over the trick-or-treating and especially our neighbor J's fabulous Halloween party, but they also had a lot of fun. 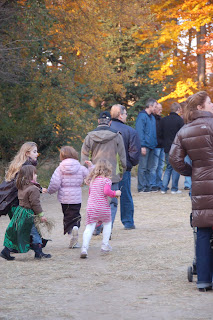 I met the family there after a class and the girls had already had their faces painted and done some crafts. Then we wandered over to a hay meadow and spent quite a lot of time throwing straw at each other (I think they enjoyed it more than I did) 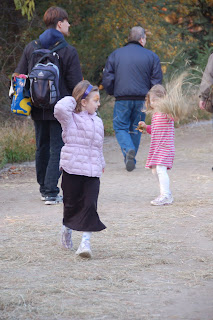 . We did some walking around and enjoyed the grounds and then we bought the children each a small pumpkin, rented a sharp knife and a spoon and the children drew the faces and we carved the pumpkins for them.
Some more playing and some tree climbing and we went home, put tea lights in the jack-o-lanterns, and displayed them in the window. 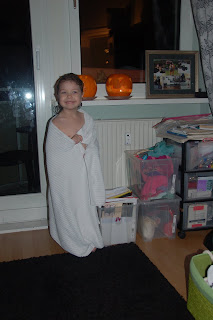 Hello! I came across your article while looking for trick or treating tips in Berlin.. Could you let me know where exactly in Zdorf you went? I want to give it a go- despite the crowds. I'm also an American in Berlin and I miss celebrating Halloween in the States. I will also check out the Botanical Gardens.. And I've read that Domaene Dahlem and FEZ have fun Halloween events, FYI. Thanks!

Hi Cassie- Sorry to be so late getting back to you. As you may have gathered, we moved back to the US and had twins very shortly thereafter— I'm just starting to get out from under! Zehlendorf is swarming with 1000s of kids- take a bus in and you can't miss it! I would also recommend the Halloween activities at the Botanical Garden- they were great fun.But Z'dorf is only for kids. For grown-ups, go to parties and I'd say at bars in F'hein— lots of costume parties there!