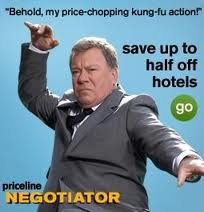 I want to make a digression to talk about one of my favorite companies: Priceline.
I only wish that I could Priceline my trips from Europe to the US (they don't allow it with trips originating in Europe:-( ) because the amount of money that I have saved on vehicle rentals is absolutely amazing. We rented a car for one day from Miami airport at 35% of the cheapest rate we could find (for a minivan, which turned out to be a fully loaded Town & Country), but got the car from a top three company.
We decided to rent the car for one day only because the prices from an airport location are substantially higher (on a daily basis, not a one-time) than those of a vehicle rented from a non-airport location due to an airport surcharge. In the past we had taken a shuttle to an off-site location, but in this case we were both time-constrained and expecting to be exhausted.
We then booked the much longer package, at a 60+% savings off the daily rate, 44% of the weekly, that evening. It turned out that (on the day we booked, although not on the day we had booked the first rental!) we were able to get a very good rate at a different airport, which must have had an oversupply of minivans (they must have been renting briskly at MCO aka Disney).
We were able to drop our Miami van off at FLL without any penalty, pick up our new one (also a T&C, though this one was not leather) in less than 30 minutes and continue on our way to meet the parents. This was foreshadowing that we were actually supposed to drop this van off at FLL (we expected to take an airport shuttle to Miami, but when we saw the price for 4 of us, said "No way!") and wound up taking it to Miami (which has a handy gas station less than a mile from the rental drop off area, and also has a wonderful monorail directly to the terminal— just sayin'!) instead.
Priceline saved us an incredible amount of money (particularly as more than 30% of the cost of the rental was the taxes and fees, all of which are based on the base contract cost). It took some time, some logging in and out, some basic calling to get expected amounts, and some bravado, but it was well worth the time spent.

---They also have great rates on hotels , but between points and discounts, and because I also like to know exactly where I am staying, I stick to my free (points) rooms or look over at hotels.com (or hotels.de which strangely sometimes has even better prices on hotels in Orlando than hotels.com.).
(edit: I received no compensation for sounding like an ad, but if you have a good experience one day, I'll be glad someone else save money too.)
Posted by G in Berlin at 12/09/2011 10:34:00 AM