This morning while I was helping T2 with her 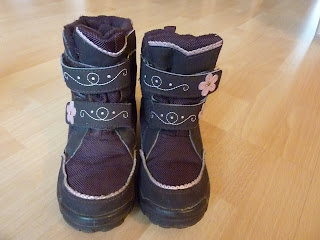 boots, she told me that one foot was tighter than the other.
Since it has gotten cold and she has had to wear boots and not sneakers, she has moaned every day that they were too tight: I thought that she was just pulling my leg again. In the past, I could make her happy by pulling on the tongue or adjusting her socks (because the boots are not tight).
I took them off and played with them and put them back on: she still lives in a magical world where I can make her boots change size by doing so. But she complained again that one foot was too tight.
So I took them off to check.
Yes, one boot was 28/29 and the other was 30/31! I had bought both pairs at Tchibo last year, when the girls actually had different size feet (T2 is now only 1/2 size behind T1 and I'm guessing will surpass her next year). 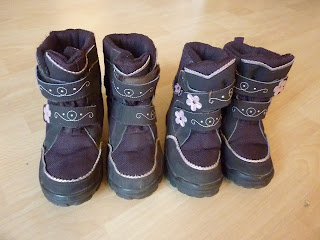 I pulled out another pair of T1's old boots (T2 has 3 to choose among) and took her to kita, hoping that I had not donated the other half of each pair to charity (or friends) already.
Took about 15 minutes of digging and I came up with the other 2 boots— that's a relief!