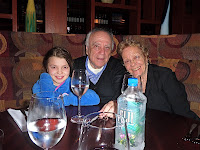 Vacation! We did so much that it will be hard to put it into a few posts.