I really like the Animal Kingdom. Even more than the Magic Kingdom it is aimed at young children. It is less-crowded, less stressful, and has shows and playgrounds to make toddlers happy. According to our TNG on the safari, it also has more African flora and fauna than any other place in the world outside of Africa.
When Thing1 stood by this (on the way into the Bug's World show), it 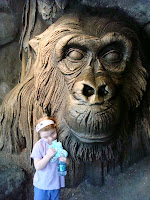 made me think of Planet of the Apes. Gorillas just look so wise, don't they? 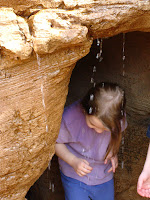 exploring a cavern by a waterfall. 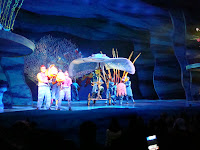 This was the Finding Nemo musical. It was really spectacular. The sets and music were great and the concept was interesting: the actors were holding (as one can see) the "puppet" characters above them, as they ran and danced and sang. Most interesting was that they manipulated controls on the sticks to make the character's mouths move.

Here is the petting zoo, which one arrived at by train. I really liked it. The best part was that it was not allowed to feed the animals and the rule was strictly enforced, even to the extent 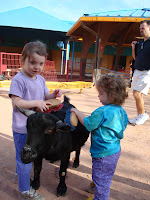 that when children attempted to pick up hay to feed the animals, the guides prevented them from doing so. I felt that the animals were far nicer because of this. They showed no aggressive tendencies, which is something I've always seen in petting zoos, when the animals attempt to beg their way to the most treats and can become quite pushy about it.