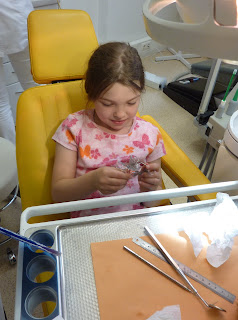 6/30 I had spent the past year asking our regular dentist about when it would be time to look at T1's teeth to discuss orthodontia. I could see from how her teeth were coming in that this would be an issue and I had the greater concern that certain tooth and jaw problems are genetic and I had those in spades.
In April, I insisted on an X-ray (digital, very easy) and the results were worse than I (or the dentist) had thought possible. Not to go into great detail, but our dentist immediately said that these issues would be far greater than he could handle and we found a Kiefer-Orthodontist who specializes in children (younger than the norm) and difficult cases. We got a relatively emergency appointment (within the week) and brought our X-rays with us (kindly sent by e-mail and carried on a USB stick).
The Dr. was also concerned. Although not, she says, the worst case she has ever seen, it is right up there with them. In particular, T1 appears to be missing (among others) an adult tooth which is theoretically not ever missing. We have hope that, perhaps, other teeth may be calcifying away and appear later, but at the moment it looks not good.
So T1 is wearing upper and lower plates, sparkly purple and with an embedded Teddy-bear, and she has been super good with them. We have an appointment with a surgeon next week, not because it will be possible to do surgery in the near future, but because the plan of work will span the next 10+ years: implants will not be possible until T1 is between 18 and 20.

Here a moment to discuss the difference between the US and Germany in regards to both health care and care for citizens and children.

Our top of the line expat insurance carries the usual limitation on orthodontia (including our top of the line dental). We will, of course, take care of our daughters mouth and jaw problems. We would do so even if I needed to go back to work to do so or if we needed to get a loan to do so. The sums will be significant and less than 10% will be covered by US insurance (which we pay for— it's most definitely not free, although subsidized by the German's employer). The amount that we would save in taxes paid if we lived in the US would be greater than the amount we need to pay for the course of treatment outlined. In fact, in the US, the total amount we paid in all taxes (including the amount paid to high tax state NY, but not the (very large) amount paid in real estate taxes) was considerably less than what we pay in Germany. However, here in Germany, no matter what tax bracket one is in, one has health care, and, in the case of severe requirements such as my daughter's, orthodontia (not for pure cosmetics, but for structural reasons and starting at cases far, far less severe than T1's).

I prefer a country which believes that children deserve to have structural irregularities taken care of regardless of how much their parents earn. I am happy that our tax dollars go to support this system. The real issue is when one both pays the taxes (like us) and does not receive the benefit (like us). A reason to look into switching into the German public health system when it is available.
Posted by G in Berlin at 6/30/2011 11:56:00 PM

I have no idea how much savings are in it for you, but I think there is a possibility to deduct some extra-ordinary health-related costs for tax purposes in Germany as well.

I can go digging if this is of interest.

don't know if the first one went through - this could be helpful for your German taxes (a way to get back some of what's not covered by insurance)
http://de.wikipedia.org/wiki/Au%C3%9Fergew%C3%B6hnliche_Belastung

Thanks so much, annonamoose. We do (already) deduct as possible the amount that we pay for health care over what is reimbursed by insurance. The amount is so great(and so strange to the German tax authorities)that we have had that amount audited every year and every year I assume they look in disbelief as we prove how much money we spend on health care. Add that to how much time I spend arguing with our insurance company (always paid after several arguments)and if I could just be on public it would be such an incredible relief!

Gosh, all I can say is, I wish your daughter the best of luck, and I hope that her teeth can be fixed as pain-free as possible.