My place, the Speed Trap 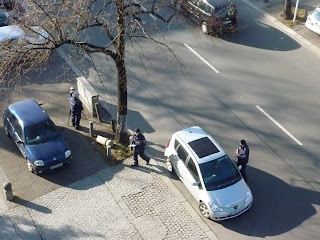 We absolutely love our new apartment (since we moved here last February) and we absolutely love our new neighborhood and its location. But what we haven't loved is that the street on which we live is wide enough that car drivers apparently feel that the posted 30 km speed limit is optional rather than mandatory. So much so that twice men (once in a truck, once in a white van) have pulled up on my right side at one of the three lights, gestured at me to roll down my window, then asked why I was going so slowly. When I pointed out the speed limit, in both cases they pulled around me from the right, and crossed in front of me to take a left.

So when we came back from a party (post later) this weekend, I was happy as a clam to see that the Polizei were using our street to decrease Berlin's deficit. (When they did this last month, the German walked over and thanked them). While we watched, they pulled cars (and many taxis) over, generally two at a time, and ticketed them.
What amazed me was how the speeders could 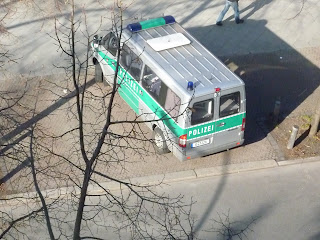 They did this again on Tuesday, as I saw when I got back from class, and it seemed as if there was an endless supply of speeders. The German and I joke that this street (and Brandenburgische-strasse) could between them put Berlin in the black. They were, both days, taking note of how many cars were speeding even though they pulled over only a small minority of those cars (stopping at two at a time) so I wonder whether they are considering some type of installation to slow traffic: I would e greatly in favor of such.
Posted by G in Berlin at 3/22/2011 02:26:00 PM

my husband got blitzed and the bill came this week and i did a little dance of joy - i love it when this happens to him because "i'm not the only one!!!!"

it's only happened to me twice but now he's up to twice as well.

i think it's great when cameras in cars do the jobs of the cops (not in your story) because it frees up the police to do other things. you know how much time cops spend in america in speed traps!

We were three kph over the speed limit while looking around the burbs in Munich when we got blitzed- what a pain. Here, I think a primary reason for doing this is to actually slow drivers down by putting the fear of the police in them and I hope they continue- I have thanked them for doing it and hope they will keep on doing so: I'm tired of being honked at for doing the speed limit!I hope the fine is high enough to make it worthwhile, at the rate they were pulling them over, the volume was certainly sufficient!

What gets us is the speeding camera. Since landing in Germany in June09, we have a total of about 6 speeding tickets. They were only usually about 5kph over. Over the 15 years of driving in Australia, I only ever had one and that was when I was really young and stupid.

Here in Berlin there aren't as many cameras as in the more monied areas of Germany, I think. There's something to be said for slowing residential traffic down, but 5 k/h is only 3 mph- I think I need to calibrate my speedometer (although to be serious, it's 6 kph fast per my GPS- perhaps that's to help one not get blitzed?).