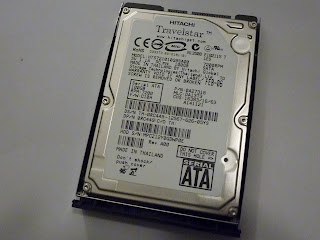 Just after I agreed to be nominated as editor for the monthly newsletter of my women's group, my PC-compatible blew up. Not literally, in a puff of smoke, but figuratively, with the pop of the motherboard going crack.
This wasn't the first time. My original Dell had 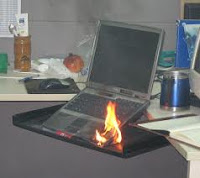 been one of those that caught on fire.

(The image to the right is a reference image, not my actual computer.)

My actual computer, a Dell Inspiron 9300 top of the then line, actually sparked up a flame while I was breastfeeding T2 in 2006, which I found inhibited the milk flow. Dell was very apologetic and replaced it with a 9400 and some extras. I haven't actually been using it for much for the last few years, except to sling TV to my computer through its handy HDMI port and when I needed to 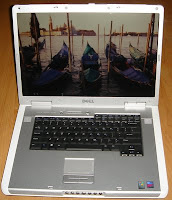 reference sites that don't allow me to access through my Mac (such as my husband's HR portal). I had long ago removed all data to my Mac and to back up.

The NL, however, is edited in Publisher, a strange little PC-only Microsoft program. I had anticipated being able to do some final edits and the after proofing edit at home, rather than relying on my assistant or the office (in Mitte!) computer, so I found the timing to be rather annoying. Also, watching TV on my Netbook is irritating beyond belief —I am always working on the Mac when watching TV, so I am not willing to use that HDMI port and the Netbook doesn't have one:-(.

Finally, after having the dead laptop clutter up the house for a few weeks, we took it (minus the above hard drive, because I'm not certain how to scrub it) and another dead computer (a hand-me-down to our daughter from an in-law that never worked properly) to the recycling hof, where it was eagerly taken off our hands. I hope the memory (which we did not remove) and all the other once high end bits and pieces serve someone in good stead.

The big question now is, what to do? I'm in the UK next month: shall I buy another English language laptop there? Shall I wait until May, when I am in NY at BookExpo? Or shall I get a new Mac, run PC virtually on it, and use my old Mac as a sling server/back up?