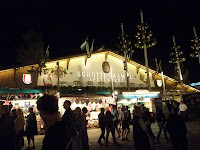 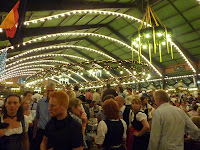 Here are a few pictures from Oktoberfest 2010. I'm pretty awful at grabbing pictures of myself, so I hope that I can get a few of myself in the Dirndl and the German in his Lederhosen from the friend with the camera.

We dropped the girls with a friend on Saturday evening after services and breaking Yom Kippur fast because we had a 6:50 train to München on Sunday morning. It was a bit stressful because, although the German does this every week, he had forgotten that Sunday schedule in the early morning is a bit different than during the week: we had two long delays as we waited for our U-Bahns and I was a bit stressed that we wouldn't make it, even though I had us leave 15 minutes earlier that he had wanted (I had tried for 30 minutes, but my reach exceeds my grasp). We ran through the Hauptbahnhof (not easy when carrying a rolling suitcase down to escalators at speed) and got there at 6:50. Luckily, our train was actually at 6:52, because we took off on time.

We arrived timely in München and went to check in at the hotel. Because of Oktoberfest this wasn't the German's regular hotel, but a Westin a bit further out and which I liked even more than his standard. After we checked in, the German decided that we were on the wrong side of the hotel,called the desk and had them rebook ous on the side with the view of the city (I had thought the greenery view was quite nice): he was right. The other side had a gorgeous view of München with the Oktoberfest Ferris wheel in the background.

We showered and changed into our Trachten and grabbed the U-Bahn back to the Theresienwiese to meet M at his table at the Weinzelt. I have never seen so many people in Trachten in my life, starting at the Hauptbahnhof and continuing until I left the city. It took us a bit of asking, and a little dodging of big men who were unsteady on their feet, but we found it and our table and joined the party. We stayed from about 3:30 until about 8:30, when we bid our new friends good-bye. The food was lovely and the drink was fine— no beer in this tent except .5l of Hefeweizen!

We walked round a bit on the way out, peeking in several tents and enjoying the sights (for me, the fabulous different regional variations on Trachten).

On Monday, after the German trundled off to work, I met up with some of M's friends who were looking about a bit before they left to various parts of the globe. We had coffee and then just wandered about a bit. I finally watched the famous clockwork automatons in Marienplatz and then we just walked, looking in shop windows (good heavens, my Tracht was cheap compared even to department stores!), looking at the Viktualenmarkt (wonderful "ancient tomatoes") and, after grabbing a tea, looking at the Residenz. It's too bad they needed to return to M's for a trip to the airport, because that is at the base of the English Garden and the weather was wonderful: perfect for walking through the gardens.

I met the German for lunch at Vapiano, a fast food Italian place that we also have here in Berlin and which I like very much: we split a Penne Arrabiata and a Salat with balsamic and beef.

Then I wandered back to the hotel and put my feet up (figuratively) while drinking Lattes and tea in the executive lounge, enjoying the view of München.

I went back into the city to meet the German and his co-workers for dinner at an Indian restaurant and it was good! The waiter gave me a warning when I asked how spicy the food was, which was echoed by the Brits that I was with,and I am glad I listened: the Jalfrezi was spicy enough for me and spicier than vindaloos that I have in Berlin. 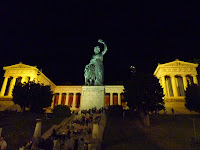 e aimless walking in the fabulous weather and then a return to Oktoberfest and Trachten. Strangely enough, it was far busier on a weekday night than it had been on Sunday night and we had trouble finding a spot at the tables in a tent. We wound up in the Hofbrauhaus tent and it was nice: I had a 1/2 liter of Apfelschorle and the German had a Maas. We listened to a amazing percussion band up by the stone buildings that you see on the left and looked at the large statue of Bavaria, although we were too late to climb her and look out over the Wiesn from her head.

The Olympic roller-coaster (I didn't take it myself- I was still a bit queasy the next day. Not from drinking, but I'm starting to suspect that the food that we ate at the Weinzelt, although tasty, had quite a bit of MSG, to which I have a severe sensitivity.) 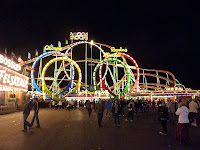 On Tuesday I decided that I needed to take an earlier train back to ensure that I would be on time to pick up the girls and re-booked the earlier (7:43 am) train. In the event, I was definitely right in doing so: although we moved in a timely fashiona nd I had good luck with the S and U connections, the traffic ws snarled on the way to the school, with a tunnel being closed and the usual Messe issue (the police should crack down on what Messe visitors do to the surrounding neighborhood in their cheap desire not to pay for legal parking) and I would have been late if I had taken the train one hour later. With my in-laws leaving immediately after dropping the girls in the morning, I feel a lot of stress even planning to be early.

This shows my nicely reserved seat from München to Berlin: I actually didn't sit in it until Leipzig 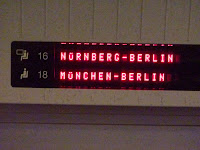 because I wanted a window seat. However, my neighbor in the window actually wound up not showing and I just spread out a bit.