It's not just getting rid of things 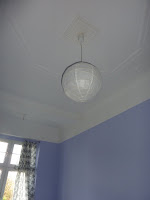 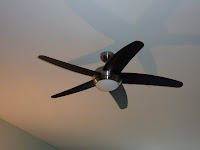 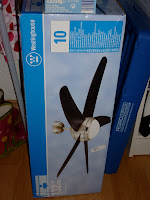 The thing about de-cluttering is that it's not just about getting rid of things. It's also about finally getting things done and organized, about finding ways to display things one wants to display and store things that one wants to keep.

It's only been about 7 months since we moved in and we have finally gotten the last two lights up. There's a bit of a story to go with that: it's not that we have been stumbling around in the dark for the last half year: we have standing lights.

We had a lovely 3-light halogen for over our dining table, but it just didn't work in the new apartment: rectangular and the new room was already wired to a central point. In addition, the bedroom had a (bare— I know!) bulb hanging from the ceiling so we did have some overhead light when desired. The ceilings ranged from 12 to 14 feet and our ladder was a bit low, the German doesn't do electric and we didn't want to spend real money on a dining room/living room light when we couldn't find a buyer for the old one.

This summer was pretty darn hot for several weeks, though, and I was panting. There aren't a lot of good looking ceiling fans in store here in Germany, as I have noted over the last few years.I'm a person that likes air, so we also have standing fans but this spring's heat wave simply overpowered them. I found a ceiling fan/light combo that we liked on Amazon, set up an installation date with our handyperson, got it in, and then C blew us off twice. We set a new date for after the summer and then we left the country and came back 7 weeks later. When C couldn't make that date, we gave up on him, which is too bad: he was hreat for a while.

However, one electrician later, we have a great ceiling fan/light and a new (only 2.99€) light and cover in the bedroom. I'm really glad that we used a professional, because the living room ceiling is dropped (from 14 to 12 feet, don't ask me why people do this) and he was able to affix it properly, something I am always concerned about with ceiling fan.

Yeah! If you look carefully, you can see a gap: that's because the lights in the apartment were originally gas-fed and the fittings are a bit different. It really makes a difference that we hadn't really noticed as lacking before.
Posted by G in Berlin at 9/03/2010 11:21:00 AM