While I have been clearing things out of the apartment (a constant struggle, documented in my other blog) one of the issues has been the market (or lack of it) for used items in Germany (and particularly Berlin).

I was discussing this with my German teacher today at lunch and she agreed, mentioning that she had attempted to sell her son's bicycle and been offered 10€. She wound up selling it for 180€ on kleinanzeigen, which she, the buyer (and I, as someone looking for a new bike for my older daughter) thought was a very reasonable price for a bike in good condition (about 45% off the cost of a new one).

So what I have been doing with most of what I am "de-accessioning" is just giving it away. Good clothing to the donation bins or Humana, bad to the Orange bin, electronics to the Orange bin or Recycling Hof (where folks take them before they hit the refuse and I assume strip and resell them- good for them!), books to the public library, and so on.

If I can't get any monetary return for my items, I like to feel that someone else is using them and getting some enjoyment out of them, so I would ordinarily use Freecycle. But I hate waiting around to see if people will show up for what they "reserve" and what I have found extremely easy to do is to just give things away. That is, I put them outside with a sign on them saying "Zu Verschenken". It seems to take no more than a few minutes for things to disappear (I think because what I am putting out is above the average quality of what many people sell at Flohmarkts, from what I have seen). 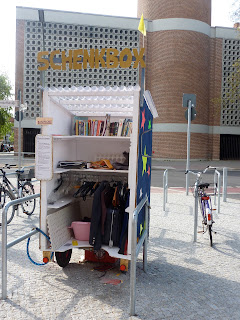 In Berlin, just as there are book kiosks (and now the art initiative is spreading throughout Europe), where one can take or leave books (started as a living art project), there are also "Zu Verschenken" kiosks, as you see here.

But I think that the items I have been placing outside are more desirable, because they are immediately taken, whereas the items in this Schenkbox seem to just remain. I often wonder whether what I put out is sold on, but in the end, what matters to me is that they don't hit the waste stream but are actually used, whether someone else profits from them or not.

we saw a similar box on the sidewalk with books, but with a sign saying paperbacks were .50 and hardback 1 EUR and a little piggy bank for payment. I love the honor system here!

that's fascinating. berlin's culture is so different than cologne's. i missed reading your blog lately and i wanted you to know how much i enjoy your perspective. i need it, i feel we are kindred spirits!