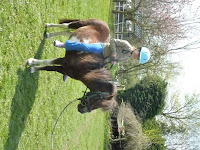 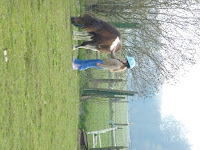 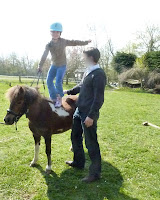 The children talk constantly about visiting Onkel H when we leave them for a few days with Oma and Opa, and who can blame them? Onkel H and Tante U have a pony, with a foal. Sheep, with lots of little schäffchen. Special geese, white and mated, homing pigeons and piglets and chickens, whose eggs one can collect.

So, on our visit to Oma and Opa, we took a run over, our first. We were just amazed at how one can have a real smallholding right in the middle of a village. A charming house, that they built a few years after getting married (so some 30 years ago), with an open kitchen, high ceilings and lots and lots of glass and windows (or the exact opposite of my in-laws' house, which was built around the same time), rather on a chalet model, I guess. Very airy and comfortable. And then small outbuildings and barns and fields, all secret and hidden behind a housefront which looks like any other suburban building! 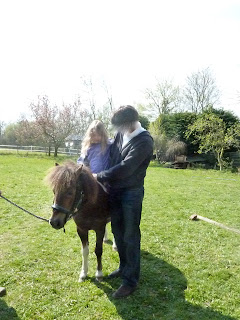 Onkel H retired (as a family doctor) over several years, and after doing some consulting to his practice (which his son and daughter-in-law have taken over as Dr and nurse), he is spending more time with his enkelkinder and animals, as well as doing some traveling and lots of biking (he is incredibly fast on his mountain bike).

Both the girls gathered eggs and petted lambs and brushed the horses and then did a bit of riding. The German thought it would be fun to put the girls on the pony together, bareback, and so they were simultaneously bucked off. (No picture- I was running toward them.) That was not fun for either of them, but especially not for T2. Above you see T2 being soothed into remounting (we didn't want her to stay afraid of riding, since she is still interested in taking lessons next year)--- afterwards, we made a daisy coronet (below)and she felt much better. T1 is actually standing on the pony after being bucked off--- I'm not certain if she just loves ponies more (it may be) or if her fall was cushioned by T2! 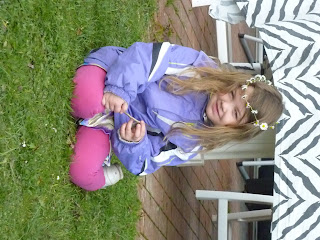 warning - the worst thing that could happen to you would be to have one, or even 2 (!) children who love horses. i know, i am one. horses are dangerous and expensive, and that is it, over adn over, exponentially. if i could take a pill and be cured of horse craziness, i would. absolutely. but i cannot take this pill, so i suffer this illness that costs so much, and endangers so much. you cannot keep your girls away from horses, because it doesn't matter, i had no contact as a city kid, but my dreams were horses every day and night. i'm sorry that the pony was rude and made them fall off! ponies in general are cranky bastages.