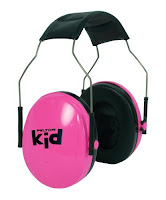 We were able, through points, to get a package to Alegria in Berlin for all 4 of us. With the recent experience of having the children in the Schottenhamel tent at Oktoberfest (they lasted about 5 minutes before beginning to demand that we leave as it was "too loud"- we barely managed to eat our meals) we used a bit of forethought and ordered in ear protectors for the both of them. Of course, they chose pink.

Although I have seen several Cirque du Soleil productions, this was the first of the smaller, stadium shows that I have seen. I read the description before bidding on the package and the show was described as light and frolicsome, which was a good description: none of it was inappropriate for the kids (we saw Verekai in Berlin— in a Tent— some years ago and it would have been far too frightening)and they enjoyed all of it.

Strangely enough, both the girls liked the Clowns best (I guess it makes sense, although I have 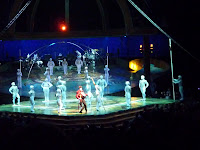 never been much for clowns). For myself, I found what must be the "aerial trapeze" act (although what I saw was not what is described) the most fascination: It was like a huge pendulum clock, building and growing and going higher and deeper with each trapeze artist. Very impressive. I also found the set itself extremely well-done- the "floor" was like a geodesic/fractal area, sloping upwards toward the back (and obviously adjustable to the stadium) and its coloring and intensity of lighting were controlled. The opening sequence was just charming and really made one feel as if observing an actual Faeryland (and the costumes and act made the fantasy even more believable). The whole experience was really well-done and I recommend the stadium experience: it is not lesser than the Grande Chapeau or Permanent Exhibition, only different.

As has been true with our other packages, I was very impressed as well by the VIP food and drink laid on (although wasted on us, as the girls eat two morsels and we don't drink while driving). In particular, the roast beef/prime rib that we had (in the Premium Lounge at the O2) was the best that we have had in Germany, matched only by the steak that we had at the Hotel Pulitzer in Amsterdam. 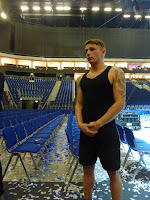 In addition to the show (and good seats), and the lounge access, the value added of this package was the chance to chat after the show with the director and the one of the performers. This gentleman is a performer in the Powertrack act and a former world class athlete from Iceland. As the kids were falling asleep in our arms, I couldn't take any notes, but the questions were strangely intelligent (unlike some of those asked at my "back stage" Q&A for Corteo). He discussed how one becomes an athlete and performer for Cirque (they can inquire or many are being scouted while still performing in their athletic careers), the route he has taken (with the ability to change shows through request and audition) and what opportunities the artist has going forward (he is currently team leading and choreographing and there are also non-athletic opportunities as one ages). The director talked about life on the road, how the stadium shows differ from big tent or permanent exhibits, the costs and transportation issues, and issues of the group as a whole traveling gestalt: eg, shipping costumes by post with each costume valued at €10,000s and up!
Posted by G in Berlin at 10/14/2011 10:42:00 PM