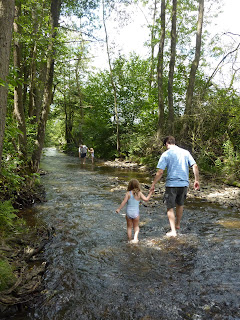 Over the river, and through the wood—
And straight through the barnyard gate,
We seem to go extremely slow,
It is so hard to wait!

Lydia Marie Child
The children spent the last week with Oma and Opa, some of which we spent in Rome and some of which home and here. They think of the time with Oma and Opa as being a form of adventure camp. In the last week they have:
Summer camp for T1 was lots of fun, with many interesting day trips (T2 stayed in kita), but this was truly an adventure camp for the two of them!
Posted by G in Berlin at 8/02/2011 09:55:00 PM