Cooking courses at the VHS 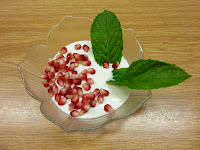 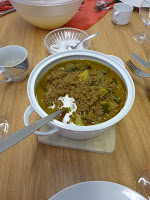 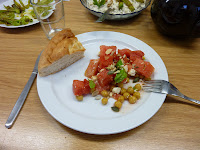 My birthday present from the German, amongst other items, was the gift of time: I abandoned the family and took several cooking courses through the VHS system. I enjoyed them all, in their varied ways.
In addition to garnering many interesting recipes and having the opportunity to decide how I like various dishes (and how I might alter them from the originals), I very much enjoyed having the opportunity (while on vacation from my language course, which starts up again next week) to actually speak to Germans, in their native habitat, so to speak. It's good to know that, even though I feel completely incompetent in German, I can follow a teacher and communicate with Germans without them needing a dictionary. I have taken several other cooking glasses at the VHS (including jamming) but I actually feel that my cooking vocabulary grew by leaps and bounds this past week and I had a great time. 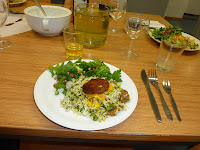 The photos you see (above and here) are: a Hirse mit Muskatnuss, Orangenblütenwasser und Quark (from Senegal— the dish with pomegranate seeds), Saffron Basmati rice with "layered"(smothered) ground lamb with young peas and fresh dill (Persia), a watermelon and goat cheese salad (Persia), Schwarzen Augenbohnen-Bällchen (black-eyed peas) frittiert with veggies and chili (Senegal and it really wound up bread-like), and the first baklava I have ever liked (made with less than half the sugar and honey of a Turkish baklava and tremendously refreshing without being 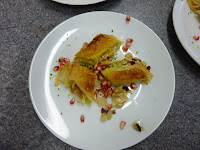 nauseatingly sweet). I will certainly be making some of these dishes again (particularly the non-pictured but delicious joghurt, aubergine and zucchini dips) as well as the mains and deserts (although I will need to cut the recipes to a third!).

Although I enjoyed all 4 courses that I took, the 2-day bread course was really fantastic: the garlic baguettes that we made were out of this world! I may have to take that again, because the specific folding techniques that create the baguette (rather than simply the dough) are a bit intricate and I'm not certain that I have them down.
In the bread photo, one sees (my breads):
The final photo is of our bread teacher, a master baker, discussing some of the finer points of the sauerteig we were using (which 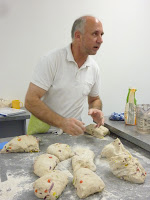 is absolutely not sourdough as Americans know and love it). This class was 75% male, which was amusing since of the other three classes: 1 had 1 male, 1 had none, and the third had two husbands accompanying their wives. Bread making is considered a very male occupation here in Germany (and after kneading a dough that made 10 loaves, I can tell you that without a machine, it requires real muscle)