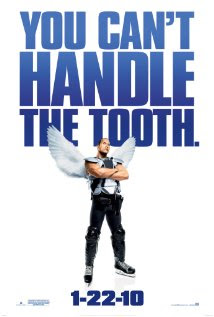 I just watched The Tooth Fairy with Dwayne Johnson and it was absolutely hysterical. With several uncredited riffs by Billy Crystal, whom I adore, as well as Julie Andrews as the Fairy Godmother. Not to be missed and my girls will be able to watch it this week (the German and I were pre-viewing), unlike Percy Jackson and the Lightning Thief (pre-viewed earlier in the week).

The former had a great story and one that I want my children to learn: that hard work and practice and good will can help one to succeed. The latter was (beside being far too violent for my girls) all about how one's success is solely determined by who one's father (or, secondarily) parent or relative is. Not the ideology I want my children to take in.

One could look at this in the context of the Royal Wedding, or the American ur-story versus the European, but I'll leave it at the simple: one is appropriate for my children at this stage and the other will not be, even with explanation, for many years.
Posted by G in Berlin at 4/30/2011 01:53:00 AM

I saw only bits of Percy Jackson. I had the general impression that it might have been a fun view after doing the Greek mythology unit in 5th grade.