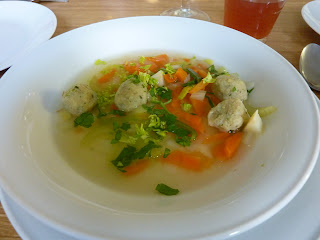 I enjoyed the course, in its slightly woo-woo, perhaps one also believes in homeopathy way, and I found the food that we actually cooked interesting because it was really German. In fact, I was able to use it as a discussion with my mother-in-law later.
Here above, however, you see a quite nice freshly made vegetable soup with Grießmehl Knödel. The recipe appeared very similar to that of matzoh balls, but they were as thick and heavy as cannonballs. I had always heard of matzoh balls tasting like cannonballs, but my mother's recipe (the Manischewitz recipe often made with soda water and then cooked in chicken soup) is light as air. Now I know whereof they speak and now I know whence matzoh balls derive. Truly these things barely increased in size when cooked, while matzoh balls more than double, but all the mass was as a ball of iron.
Posted by G in Berlin at 4/10/2011 04:27:00 PM