It's been a crazy month or so.

We started by going back to Westchester county to clean up our house in Westchester, NY for the new tenants. The prior, German tenants, were returning to Stuttgart. Neither our broker nor the tenants, nor any of the prospective tenants, had indicated any issues with the house.

So we were overwhelmed to discover unattended and unreported flood damage, general non-normal wear and tear damage to the plaster walls, a bathroom renovated two weeks before turne dover to the new tenants that was now destroyed (water damage, mold, marble damage), flood and mold damage in the basement (where the dehumidifying system was also set at 35% instead of 70%— or even higher to deal with the unreported mold), furniture which was destroyed and filty beyond belief: it was shocking. From the large to the small: the buckled floor in the basement to the lost remote to allow the ceiling fan/light in the living room to be turned on to losing the privacy pins to the nickel door levers to not replacing a single outside light bulb (we had left them three years worth of compact fluorescents- just not enough of the low wattage for outside fixtures). The list was endless.

All this while they had turned off the cable and phone (which we had requested to retain for the half month) so we had no easy way to contact anyone. We still haven't spoken to the insurance company officially, although we have talked to our agent and taken hundreds of photos before beginning to mitigate the damage.

There's a 4-6 week lead time on the replacement vanity (special order to be code compliant in a small bathroom) and the marble repair will wait for that. The shower doors will be in stock next week and taken care of then, but our "vacation" was having done/getting estimates for/doing:
This was after they spoke to the husband, as one German to another, and asked to use their security as last month. Because they assured him of how everything was in order, and because the broker agreed, he complied. I expect that will be a little less than we will be out of pocket. I expect he won't do that again, either. I also think that after the current lease is up, we will be considering selling the house rather than dealing with this again.

After we get back to Berlin next week I can't wait to start dealing with all of this long distance and time estranged to US contractors and insurance companies.

I expect that I will have a lot of additions to my Downsizing blog as well, when I can sort the photos out. 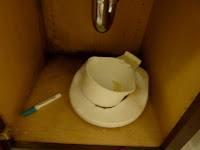 holy ....
as you mention, at least it gives you plenty of material for your downsizing blog. :-/
but really, good grief.

We went through a similar experience about 5 years ago when we moved to Shanghai--but to add salt to the wound, our property manager was pocketing the rent payments as well. Long story short, we nearly replaced every carpet, repainted every wall, all new appliances, etc. This move to Munich had us wondering whether to sell, but our son & his wife have moved in and are taking wonderful care of the house (2 yrs. now). Don't think we will ever rent it out again. If the kids move out, it will go on the market.

Wow, G. I am really sorry. It's hard to believe that people could behave like that, but I guess I've seen folks do some bizarre things on a much smaller scale with property that isn't theirs.
Still a bit stunned. Such a shame that this ruined your vacation and is likely to cause so much more stress.
Hang in there!

Not the way you wanted to spend a vacation. So sorry.

What a shame. Your husband must feel especially betrayed by a fellow countryman and family. Unfortunately, it's not a the most advantageous time to sell, at least in our state's market. This is why I don't ever intend to invest in rental properties. I hope you're able to salvage some of your vacation.

Hi Wintersong- to be fair, this was our home, not a rental property, and we expected to be getting back to it within just a few years. It's increasingly looking like that won't ever be true, though, and this was just another nail in the coffin.

Ugh! Ours is not quite so bad, but I can fully sympathise with how you must have felt going into your home. It's a shock isn't it? I think I made assumptions about our tenant being clean because he was a pharmacist. Turns out him and his wife were filthy animals and lived quite disgustingly. *sigh*